There are few Senators that fight against the good that America could offer more than Senator Rand Paul.  Whether he is perpetrating the false understanding that the U.N. Arms Treaty is an attack on the Second Amendment or threatening a government shutdown over Obamacare, Paul proudly continues to clog facts and the nation’s progression. 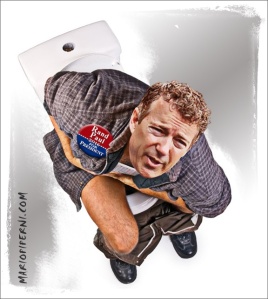 Following the President’s address regarding Syria, the Kentucky Senator quickly responded with a speech of his own.

The Senator didn’t waste any time, opening with what will unquestionably be his most factually inaccurate and insane line of the night:

This sentence is clearly not open to misinterpretation.  Paul has doubled down on a statement that Robert Ripley would have rejected.

At no point during any discussion has the President mentioned, offered or suggested an allegiance with the terrorist group responsible for the 9/11 attacks. (The fact that Sen. Paul has placed me in a situation where I had to type that sentence still boggles my mind.)

Paul does not offer any evidence to support his atrocious and idiotic statement at any point in his speech.

Strangely enough, it takes Paul just over a minute after this attack on President Obama to praise the Middle East work of GOP pin-up Ronald Reagan, a President who actually supplied weapons to terrorists.

Anybody that has been following this development for the past couple of weeks (or has read Drinks and Wings), is aware the President is calling for a limited action to deter the further use of chemical weapons.

The President has been very vocal in his justification for U.S. involvement, citing (but not limited to) Syria breaking international law by using chemical weapons.

In regards to “American interest,” the President has consistently mentioned the potentially damaging future ramifications of inaction and concern for our allies in the region, doing so yet again in last Tuesday’s speech:

“If we fail to act, the Assad regime will see no reason to stop using chemical weapons.  As the ban against these weapons erodes, other tyrants will have no reason to think twice about acquiring poison gas, and using them.  Over time, our troops would again face the prospect of chemical warfare on the battlefield.  And it could be easier for terrorist organizations to obtain these weapons, and to use them to attack civilians.  If fighting spills beyond Syria’s borders, these weapons could threaten allies like Turkey, Jordan, and Israel.”

Not to mention that the use of chemical weapons can lead to the contamination of natural air and water supplies in the region.

Paul moves on to mention the recent involvement of Syria’s closest ally, Russia.  Russia has opened discussions with Syria to allow for all of the country’s chemical weapons to be released into international control.

“Some will say that only the threat of force brought Russia and Syria to the negotiating table.  In fact, Russia has been negotiating with the U.S. for over a year to find a peaceful resolution to the Syrian civil war. 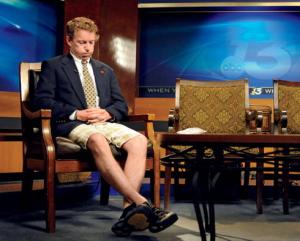 Paul fails to mention that Russia has blocked numerous sanctions (and military intervention) against Syria on the Untied Nation’s Security Council.  In August of 2011, Russia even objected to a U.N. investigation of human rights violations in Syria.  In October, Russia voted against a U.N. resolution condemning Syria for human rights violations.  Multiple resolution vetoes would follow, eventually resulting in the current deadlock on the Security Council.  If anything, Russia has prolonged this civil war.

Paul begins his closing with yet another misinformed statement.

“The President maintains that he still has the power to initiate war.   This is untrue.  The Constitution gave the power to declare war to Congress.”

According to his Press Secretary, the Senator was speaking to the American people simply as a “concerned Senator.”  The speech was not on behalf of the Republican Party, one of the few good decisions the GOP has made recently.

Other than his total ignorance of the facts, what really disturbs me about Senator Paul’s behavior is that his make-believe speech reinforces the beliefs of extreme fringe groups.   As opposed to educating, Paul has chosen to validate their vision.

Paul’s response carried the intelligence and depth of a political Facebook meme, which may explain why it aired only on Fox News (zing!).

Then again, what else would you expect from a man that has threatened to shut down his own government over a healthcare law that has already benefitted millions of Americans?  Rand Paul, American patriot.