As we learn more of the tragic events and the perpetrators themselves, many of the GOP presidential candidates intensified their rhetoric for the U.S. to cease accepting Syrian refugees.

The candidates’ comments blur the line between what you would expect from a presidential nominee and memes your crazy uncle posts on Facebook.

“They could be ISIS. I don’t know,” leading GOP candidate Donald Trump told an audience at a campaign rally in September. “Did you ever see a migration like that? They’re all men, and they’re all strong-looking guys. Did you see it? They’re walking and there are so many men. There aren’t that many women.”

One thing we can be sure of is: Donald Trump has not “seen it.” 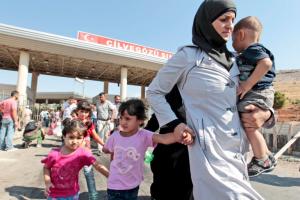 Speaking to CNN’s John Berman about the Syrian refugee crisis, Republican candidate Ben Carson made similar comments, claiming “the majority of them are young males.”

Considering these guys have a tendency to create their own facts, this issue shouldn’t be any different.

According to The UN Refugee Agency, over half of the United Nations High Commissioner for Refugees (UNHCR) registered Syrian refugees are female (50.2% as of this writing). Nearly 40% of the refugees are under the age of 12.

The day after the Paris attacks, Trump told supporters at a Texas rally: “What is going on is terrible. And when you look at what happened in that case: it was just reported, one from Syria and our President wants to take in 250,000 from Syria.”

If Trump is itching to fire someone again, it should be whoever taught him how to count.

Trump’s 250,000 number is just a bit higher from the 10,000 Syrian refugees the White House said they would accept during a September press briefing.

It is being reported that one of three suicide bombers who attacked the Stade de France stadium is believed to have had a Syrian passport. The passport found at the scene belonged to Ahmad Almohammad. 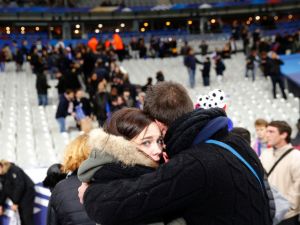 Greek authorities were able to trace the passport back to the Greek island Leros on October 3rd, where the passport holder boarded a migrant boat with 198 refugees before ultimately arriving in France.

An unnamed French senator has told CNN the Syrian passport is a fake.

In a piece for The Guardian, Migration correspondent Patrick Kingsley wrote about the process refugees face in Greece:

“Thousands of refugees arrive on the Greek islands every day. While each has to be registered before they can make it to the Greek mainland, the process is a brief formality rather than a lengthy investigation. In registrations witnessed by The Guardian during the summer, refugees simply presented identification to the Greek authorities, before being allowed to leave minutes later without anything like a background check.

Since October, each arrival has also been fingerprinted but officials still do not have the time nor the resources to assess whether or not they’re connected to militant groups.”

The United States has a far more superior security process in place than that of Europe.

Before entering the country, refugees must have an in-person interview with a Department of Homeland Security representative, pass security checks and a medical exam (including testing for tuberculosis, which can take possibly 8 weeks).

It can take up to 24 months before the process is completed for a refugee to even be allowed in the United States.

Appearing on NBC’s “Meet the Press,” Deputy National Security Advisor Ben Rhodes reaffirmed to host Chuck Todd that the United States would continue to take in Syrian refugees in the wake of the Paris attacks:

“We have very expensive screening procedures for all Syrian refugees who have come to the United States. There’s a very careful vetting process that includes our intelligence community, our national Counterterrorism Center, the Department of Homeland Security, so we can make sure that we’re carefully screening anybody that’s coming into the United States.

Let’s remember though Chuck, we’re also dealing with people who’ve suffered the horrors of war, women and children, orphans. We can’t just shut our doors to those people. We need to sort out how to focus on the terrorists that we need to keep out of the country. But I think we do need to do our part to take those refugees who are in need.”

According to the United Nations, more than 250,000 people have been killed and over a million injured in the country since 2011.

We can’t make the mistake of identifying the refugees as the very terrorist threat they are running from. Yet, the leading GOP presidential candidates are seemingly doing just that.

Donald Trump, Ben Carson, Marco Rubio and Ted Cruz have all called for a halt to accepting Syrian refugees.

We live in a terrifying time, but we can’t give into that fear.

2 thoughts on “Children of Men”