Twenty-four hours after Donald Trump became the 45th President of the United States, protestors marched in the streets of every state in support of equality and against the hate on which our current president founded his political brand. Donald Trump brought the country together… just not in the way he intended.

The Women’s March began as a Facebook invite from Hawaii resident Teresa Shook. Initially inviting just 40 of her friends to march on Washington in frustration of the 2016 election results, Shook’s plan would evolve into a worldwide event.

Buenos Aires, London, Mexico City, New Delhi and Sydney are just a sampling of cities which showed solidarity with their United States counterparts. Ultimately, a march was held on all seven continents, including Antarctica!

Every march appears to have exceeded their estimated turnout. The DC march initially expected 200,000 people. As of this writing, that number is believed to be 500,000… more than were present for Trump’s inauguration the previous day.

I joined the march in downtown Los Angeles, which exceeded its anticipated 90,000 attendees; swelling to 750,000.

My wonderful hometown of Iowa City, Iowa (a state which went red in the last election) held its own sister march, attracting nearly 1,000 people (more than doubling the 400 RSVPs on Facebook). The state capitol, Des Moines, adjusted their original anticipated number of participants from 1,000 to 6,000 once interest increased. 26,000 showed up.

For the Trump voters watching the Women’s March coverage pondering on social media, “why won’t they give him a chance?”, here it was.

This was the opportunity for President Trump to address the public and acknowledge their voice. To assure women their reproductive rights and current healthcare coverage would not be altered. To rescind the proposed budget cuts which eliminate the 25 Violence Against Women grant programs. To insure Planned Parenthood continues to receive federal funding. To hear the concerns of the black community related to police reform. To assure the children who benefited from DACA, the U.S. will continue to be your home. To apologize to the disabled and every group he attacked during his campaign. Basically, to act presidential.

None of this happened.

Rather than directly address the millions of men and women who made up the Women’s March around the world, White House Press Secretary Sean Spicer’s first unofficial press conference focused almost exclusively on Trump’s inauguration crowd numbers.

“This was the largest audience to ever witness an inauguration, period,” Spicer somehow told reporters with a straight face.

Trump’s inauguration attendance is believed to be around 250,000, far below the 1.8 million who attended former President Obama’s 2009 inauguration.

Considering Trump’s team initially posted a crowd photo from Obama’s 2009 inauguration as the banner image on his new POTUS Twitter account, you would think the new administration would know better.

In five minutes, Spicer would lie five times in a desperate attempt to inflate Trump’s inauguration numbers. It sounded like a rejected game sequence from the Saw series.

On NBC’s Meet the Press the following day, Counselor to the President Kellyanne Conway would defend Spicer’s blatant lies as “alternative facts.” Great job on damage control, everyone.

This shit is not normal.

While Trump’s inauguration looked like a Mumford & Sons concert, this weekend’s marches reflected the diversity of America. People of both genders, all ethnicities, religious backgrounds and sexual orientations walked together as one.

Regardless of Trump’s win, we are a nation on the path to becoming even more progressive.

It would have been political suicide for a presidential candidate to fully embrace same-sex marriage during the 2008 election. Now, people celebrate when the White House is lit in the colors of the LGBT Rainbow flag.

Trump lost the popular vote to Hillary Clinton by nearly 3 million votes, the largest win in history to a candidate who lost the electoral college.

Donald Trump won the presidency with only 27% of support from the nation’s eligible voters. Trump didn’t win because America identifies with him; he won because progressives and liberals failed to support his (much more qualified) opponent.

If Friday’s sudden erasure of the civil rights, climate change and LGBT pages from the White House site are any indication, the nation’s citizens will have a lot of work ahead of them over the next four years. Saturday showed that America’s populace may be up for the task.

I believe the Women’s March launched the beginning of a movement, and is not simply a moment.  The official site has already launched their next campaign, “10 Actions in 100 Days.”

In what appears to be an incredible re-working of the five stages of grief, anger is now following acceptance.

After Saturday, I’ve never felt more optimistic for the future beyond a Trump presidency. 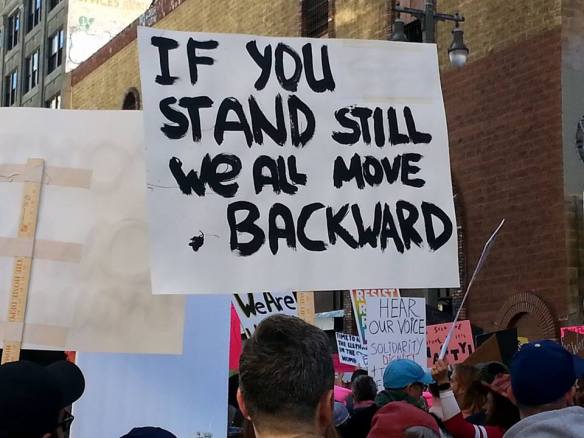 For those who attended a March:

Professors Jeremy Pressman and Erica Chenoweth have launched a crowd count. To be counted as a marcher on Saturday, you can text 89800 and send the message “Count me in.” If you would prefer to make an online submission, you can do so here.

1 thought on “What Women Want”