The biggest question at the center of those three days:  is the law itself and specifically, the individual mandate, constitutional?

If you ask Reagan-appointed Justice Laurence Silberman, the answer is yes.  Silberman is a senior federal judge on The U.S. Court of Appeals for the District of Columbia Circuit, which ruled in favor of the law 2-1.

Of course the concept of government mandates are not new.  You are mandated to serve on juries and file your taxes.  What about government-mandated spending?  It’s happened.  If we go back to 1792, congress passed a law that required every “free able-bodied white male citizen” to buy a gun and ammunition. 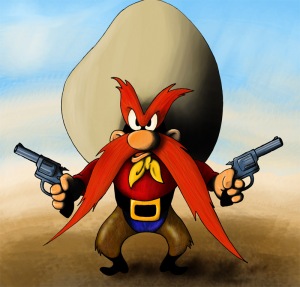 Hitting even closer to the mark of mandated healthcare spending, in 1790, congress passed a law that required any commander of a U.S. ship that was 150 tons or had a crew of ten people, to supply on-board medicine or provide medicine and/or physicians without a deduction from the sick seaman’s wage.

Also, let’s not forget the Medicare payroll tax that employers and employees pay, whether you have health insurance coverage or not.

Regardless of our nation’s history with mandates, the healthcare requirement has been a controversial issue since it was first introduced.  It is a Tea Party favorite sticking point that continues to pop up at their rallies and protests.  Healthcare reform can also be credited with being the source of their most famous sign. 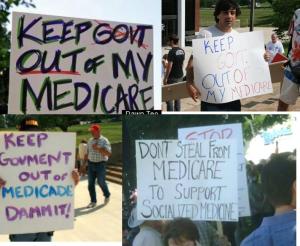 How shocked would they be to find out that the healthcare mandate originated from the conservative right (after somebody busts out the Crayolas and explains that Medicare IS a government program)?

In 1989, the Heritage Foundation, a conservative think tank, introduced the healthcare mandate in a document titled A National Health System for America, written by the foundation’s Stuart Butler.  It doesn’t end there. 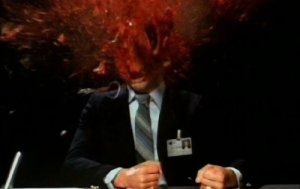 We know of Mitt Romney’s ties to the mandate.  President Obama’s plan is based off of Romney’s Massachusetts’ health care insurance reform law, which also included an individual mandate along with a 63% approval rating from Massachusetts’ residents.

Contrary to what you may have read, many of the provisions in the reform will not be implemented until 2014 (including the mandate).  I feel some of the changes we have experienced though, have been greatly beneficial:

Regardless on the view of the mandate, it would be detrimental to end the progress our country has made with these changes alone.

Hypothetically speaking, if the mandate is struck down, the President should re-introduce his original concept of the public option, which is what we should have had to begin with.

The public option would have been a great and much needed alternative to the high prices of the private health insurance industry.  I still hope to see this or a version of universal health care come back into the national conversation.

We are the only developed nation that still does not have universal health care.  The United States is number fifty in life expectancy, in the World Health Organization’s study: “Measuring Overall Health System Performance for 191 Countries”, the United States was number 37.   A majority of the countries ahead of our nation in both studies have universal health care.

After all of our tax dollars that have been spent towards the nation’s longest waged war in Afghanistan, the ill-conceived Iraq war and providing subsidies for the record breaking profit making industry of big oil, I would prefer to see my tax dollars at work for the well being of the nation’s people, our families, friends and neighbors.

Even if the mandate were struck down, I would hope many of the provisions continue to stand.  After all, who would be against guaranteed coverage with pre-existing conditions and free cancer screenings?