NOTE: The following are actual spots paid for/endorsed by the campaign and/or individual candidate represented

2011 presented the public with possibly the most insane batch of GOP candidates to ever grace the debate stage. Whether it was Newt’s idea to build a lunar colony while the economy is still recovering, Michele Bachmann’s claim that the HPV vaccine causes mental retardation, Herman Cain’s electrified border fence concept (with possible alligators), or Rick Santorum’s lumping of homosexuality with bestiality, the only things more outlandish than the candidates themselves were their batshit crazy campaign spots.

The campaign ads truly kicked off into absurdity with Cain’s “Now is the Time for Action!” spot, featuring campaign Chief of Staff Mark Block.

I love Cain’s slow creeper of a smile at the end. It’s as if you walked into a shady hotel room, having no idea the door locked behind you when it closed, only to come face to face with an expecting Herman Cain, who may or may not be wearing pants.

The big question of course was, what is with the guy smoking? After riding the success of the spot for a bit, Cain explained: “Mark Block smokes. That’s all that ad says.” You have to wonder what the ending would have been like if Block had shared the same interests as Anthony Weiner.

Of course, Cain eventually dropped out of the election and launched the sickofstimulus.com site, which would go on to introduce possibly the most outlandish spots yet.

What I will refer to as the “SOS trilogy”, introduced us to a little girl who exhibits early serial killer tendencies by killing or watching animals die with each spot ending with a shot of Herman Cain looking over a wasteland… or scenic valley.

The first spot concerning the economy, featured a fish being suffocated:

“Yes, could I get some fucking water over here?” – Dying Fish.

You always have to up the ante for the sequel, which brought us the most controversial entry into the SOS trilogy that saw J.J. Abrams blasting a rabbit with a shotgun as if it were a skeet pellet:

Editor’s note: The individual in the spot is actually NOT Star Trek director J.J. Abrams.

What is interesting is that Cain’s absurd 9-9-9 plan would have done further damage to small business. I can’t think of a worse plan for a recovering economy than adding an additional 9% sales tax to already existing state and local taxes. Also as pointed out by former Reagan adviser Bruce Bartlett, the business tax on the 9-9-9 plan allows for no deduction on wages, which would raise the cost of employing workers.

At this point, the trilogy had to take a darker turn. You can only kill so many small animals before you take a human life, in this case, via flesh-eating chickens.

The only thing worse than the average American taxpayer eaten alive by chickens, may be Cain’s own 9-9-9 plan. As explained by the Tax Policy Center of the Urban Institute and Brookings Institution, Cain’s plan would raise taxes on 83.3% of taxpayers, including the chicken food in the ad above and other individuals that would fall into the middle and lower income earner categories. As seems to be the trend in the modern-day Republican Party, the higher earning incomes would have seen a nice tax cut ($455,247 for incomes more than $1 million dollars). Seriously, someone call Max Von Sydow on this little girl. 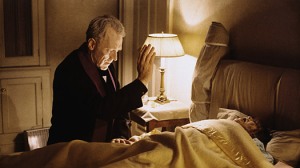 Rick Santorum enters the ridiculous ad arena with the spot, “Rombo”. The ad featured a Mitt Romney look-alike firing a gun full of mud (or similar looking substance) at a Santorum cardboard standee that even Spencer’s Gifts wouldn’t carry.

Romney should seriously consider hiring the look-alike featured for speaking engagements; he has much more charisma.

The Santorum campaign eventually went truly bugnuts, with the “Obamaville” spot. Depicting a post-apocalyptic 2014, the ad looks more like a trailer for the next James Wan film than a vision of the future.

Did anybody else notice there are no black people in “Obamaville”?

Rick Perry came out swinging proud with his bigotry in a spot called “Strong”.

Many in the online community were quick to notice that Perry wore a jacket similar to actor Heath Ledger’s in the film Brokeback Mountain. The real story, however, is with the spot’s score, which was inspired by the work of Aaron Copland, a homosexual.

The amount of negative reactions to Perry’s ad were so high, it quickly skyrocketed to the number three spot of all time most disliked videos on youtube.

Now with the GOP candidate essentially determined (Newt, read the memo), we will be seeing many more campaign spots hitting the airwaves. One can only hope the Romney campaign uses the “Rombo” concept from Santorum and features him blasting his mud gun throughout the nation, on his way to the White House before heading down to Burma to rescue a group of Mormon aid workers. 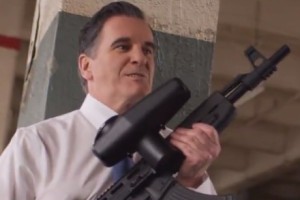