I can’t think of a single more embarrassing, ridiculous and infuriatingly stupid political conspiracy theory than that championed by the birthers.

The notion that our current president was not born in the United States has been debunked MULTIPLE times since 2008, yet members of the GOP continue to make it an issue 4 years later.

In the past few weeks we have seen the Iowa Republican Party’s platform committee chairman Don Racheter, Republican congressman Mike Coffman, Arizona Secretary of State Ken Bennett and Republican Band-Aid Donald Trump dig up the birther issue as if they were in a pet cemetery looking for Trump’s new hairpiece.

In addition to being Arizona’s Secretary of State, Ken Bennett is also Mitt Romney’s campaign co-chairman in Arizona. Trump has become a major public face for the Romney campaign recently, participating in many high profile donor events. 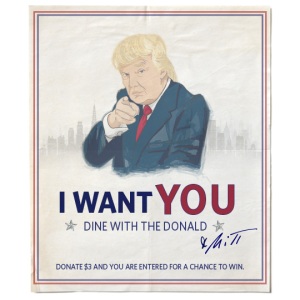 What has Romney had to say about Trump’s affiliation with a belief born from racism? “You know, I don’t agree with all the people who support me and my guess is they don’t all agree with everything I believe in.” Romney continued, “But I need to get 50.1% or more and I’m appreciative to have the help of a lot of good people.” Romney can’t even stand up to a reality television star; how would he ever confront an individual like Iran president Ahmadinejad?

Then again, this is who Mitt Romney is. He is like Play-Doh. He can mold himself to be anything and, like the colorful clay, he doesn’t have a spine.

After it was revealed that the Romney campaign’s spokesman on foreign policy Richard Grenell was gay, the attacks from the conservative right were immediate. One of the harshest (and loudest) critics was the American Family Association’s (strangely enough, anytime there is “family” in the title you know they are going to be a hateful bastard) Bryan Fischer. Grenell quickly resigned. So quickly, in fact, he resigned on what would have been his first day on the job. Fischer was the first to point out Romney’s lack of defense of his former staff member:

This is not the first time the former Massachusetts governor looked the other way while a homosexual individual was publicly criticized by the GOP or their supporters. Romney and the other GOP candidates famously stood silent as the audience booed a gay soldier who asked a question during a Fox News Republican debate last year.

In the aftermath of Rush Limbaugh’s misogynistic rant against college student Sandra Fluke, in which he referred to her as a “slut” and “prostitute,” Romney responded to the incident with: “I’ll just say this, which is, it’s not the language I would have used.” If I witnessed a man yelling such things at a woman who was only guilty of advocating for health coverage, I would not speak of them as if they were a five year-old that said “shit” instead of “poop.” There is a clear reason why the GOP is losing the female vote.

We have seen Romney rush to the defense of corporations with more passion and vigor than that of actual people, which makes him a perfect fit for the modern-day Republican Party.

Looking at a sampling of the legislation blocked by the GOP, tells me they stopped putting the American people first a long time ago.

What DO the Republicans support? In March, Senate Republicans blocked a bill that would have ended the billions of dollars in taxpayer subsidies big oil receives.  Earlier this month, the Republican-controlled House approved a plan to cut $310 billion dollars in food stamps and federal employee benefits. Not a single Democrat voted in favor of the plan.

Thank you, Mr. Romney, but I think Washington already has enough Republicans who put corporations above people.

2 thoughts on “Return of the Living Brain Dead”