Over recent years we have not only witnessed the Republican Party distance itself from proven science, but at times create its own fabricated version. In March, Republicans in the New Hampshire House of Representatives passed a bill requiring doctors to tell women that abortion causes breast cancer. Of course, this is simply not true.

Medicine is not the only science to come under attack from the GOP. Republicans have gone after global warming as if it were a girlfriend that dumped them before the high school prom. Take a look at what Texas governor and professional chucklehead Rick Perry had to say on the subject just last year:

“I do believe that the issue of global warming has been politicized. I think there are a substantial number of scientists who have manipulated data so that they will have dollars rolling into their projects. I think we’re seeing it almost weekly or even daily, scientists who are coming forward and questioning the original idea that man-made global warming is what is causing the climate to change.” 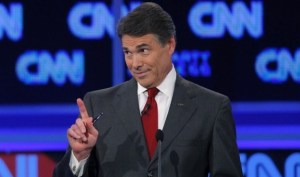 Perry may be referencing the stolen e-mails from the Climatic Research United in 2009, which some claimed proved researchers manipulated climate change data. Independent investigations by multiple groups, including the U.S. Department of Commerce, debunked the allegations of any manipulation by researchers.

During a GOP presidential debate, Perry was asked if he could name scientists whose work backs his batshit crazy belief.

Perry should have taken pointers from Romney on how to properly dodge a question. The facts are: not a single scientific body disputes that global warming is real and is the result of man-made emissions of greenhouse gases.

“Observations show that warming of the climate is unequivocal. The global warming observed over the past 50 years is due primarily to human-induced emissions of heat-trapping gases. These emissions come mainly from the burning of fossil fuels (coal, oil, and gas), with important contributions from the clearing of forests, agricultural practices, and other activities.”

Perry is far from the only Republican who doubts the proven science of global warming. A majority of the modern-day GOP doubts climate change including former leading presidential candidate Rick Santorum who referred to global warming as a “hoax” and current Republican presidential nominee Mitt Romney, who said “My view is that we don’t know what’s causing climate change on this planet.”

This is what happens when a political party caters to big oil and the Tea Party, which is a group essentially funded by big oil.

Which brings us to the Koch brothers. David and Charles Koch are the owners of Koch Industries, Inc. and founded the Tea Party affiliated group, Americans for Prosperity. Their combined wealth is only surpassed by a handful of Americans, including Bill Gates and Warren Buffet. The Kochs also have their hand so far up the GOP’s ass they might as well be a Muppet.

The GOP protected the Koch brothers and other big oil companies when they blocked a Democratic backed bill to end $24 billion dollars in tax breaks for the oil industry.

Keyser Soze would tell you the greatest trick the devil ever pulled was convincing the world he doesn’t exist. I think the GOP topped it when their supporters spoke out against tax money going towards health care reform but supported the continuation of taxpayer subsidies being used to serve an industry reporting record profits.

The push for deregulation, a common Tea Party demand, is clearly a Koch agenda to boost profits. The fact that the Republicans have been able to hide it under the guise of job creation for this long and still maintain public support is astonishing to me. As we pointed out in House of Representin’, a majority of the GOP jobs bills approved in the Republican controlled House are actually deregulation bills that would have little to no effect on job growth.

The Koch brothers have also perpetuated the falsehood that global warming is a myth in an attempt to encourage support for deregulation. Unfortunately, it has provided satisfying results for them thus far. The Yale Project on Climate Change Communication released a survey last year that showed that only 34% of Tea Party members believe in global warming.

The brothers attempted to disprove global warming by partially funding the work of physicist Richard Muller. After two years of research, Muller came to the conclusion that global warming was real. Whoops.

The last sixteen years include the hottest fifteen years on record. There have already been 15,055 record highs this year alone. As of May 2012, the United States achieved its warmest 12-month period in 117 years. Like women’s health care and same-sex marriage, this is simply another issue of which the GOP will be on the wrong side in the history books.