The 11th anniversary of 9/11 saw multiple attacks on U.S. diplomatic missions. In Cairo, several protestors scaled the walls of the U.S. Embassy, tearing down the U.S. flag. 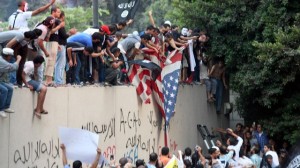 They were protesting a film called “Innocence of Muslims,” which portrays the Prophet Mohammed in a negative light.

In Benghazi, Libya protestors demonstrated outside of the consulate. During the protest, a heavily armed group attacked the consulate, resulting in the deaths of four Americans, including Ambassador to Libya, Chris Stevens. 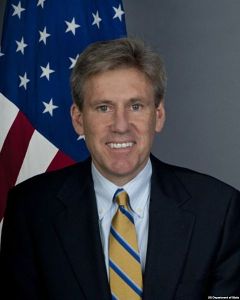 Currently, there are far too many questions to be answered, such as: was the attack pre-planned? Was it related to the protesting? Was the armed group part of a terrorist organization? Are other U.S. Embassies in danger?

None of which prevented this election’s GOP presidential candidate from politicizing a tragedy overseas.

The following is a brief timeline of statements beginning from Tuesday morning, 9/11, to Wednesday:

Tuesday, 6:18 AM
The Embassy in Cairo released a statement before protestors scaled the walls and the attack in Libya, which read: “The Embassy of the United States in Cairo condemns the continuing efforts by misguided individuals to hurt the religious feelings of Muslims – as we condemn efforts to offend believers of all religions.”

Tuesday 10:08 PM
Secretary of State, Hillary Clinton sends her statement to the Associated Press, reading: “I condemn in the strongest terms the attack on our mission in Benghazi today.”

Tuesday 10:10 PM
The Obama administration says of the Embassy’s earlier comment: “The statement by Embassy Cairo was not cleared by Washington and does not reflect the views of the United States government.”

Tuesday 10:24 PM
Romney issues his response: “The Obama administration’s first response was not to condemn attacks on our diplomatic missions, but to sympathize with those who waged the attacks.”*

Wednesday 7:21 AM
President Obama says in his first statement: “I strongly condemn the outrageous attack on our diplomatic facility in Benghazi, which took the lives of four Americans, including Ambassador Chris Stevens.”

Clearly, Romney’s initial response lacked crucial information of the tragic events (expected, considering the events were still unfolding when he released his statement) and completely misquoted the Obama administration. Perhaps Wednesday would see an apology from the GOP campaign for their hastiness?

“I think it’s a terrible course for America to stand in apology for our values, that instead when our grounds are being attacked and being breached, that the first response of the United States must be outrage at the breach of the sovereignty of our nation,” Romney told reporters Wednesday morning.

My only conclusion is Romney has no idea what the word “condemn” means.

Then again, what more could you expect from a man running as the Republican candidate for president when the Party’s own chairman, Reince Priebus posts on Twitter: “Obama sympathizes with attackers in Egypt. Sad and pathetic.”

Only Mitt Romney and the Republican Party would try to paint the man whose administration has taken out Osama bin Laden, Abu Yahya al-Libi and 13 other high-ranking al Qaeda members as a pussy.

What did the President have to say to Romney’s reaction?

I’ll be writing down my judgment with a no.2 pencil in November.

*This statement was released at 10:09 PM by his press secretary Andrea Saul, with an embargo until midnight, meaning until 9/11 was over. Then they lifted the embargo 15 minutes later without an explanation.