If you are participating in not only your final debate of a general election but the final debate of your career, you want to go out on top. President Barack Obama did just that.

President Obama displayed a comfortable coolness while discussing last night’s main focus of foreign policy, while at times Mitt Romney looked as if he were diffusing a bomb in a Lethal Weapon film.

One of my favorite moments came during the first question. Regarding the handling of terrorism, Romney complimented Obama on the killing of Bin Laden and other high ranking al-Qaeda officials, adding “But we can’t kill our way out of this mess.” After the President responded, Romney revealed his “strategy” regarding terrorism as: “Well, my strategy is pretty straightforward, which is to go after the bad guys, to make sure we do our very best to interrupt then, to – to kill them, to take them out of the picture.”

President Obama tends to word it differently (as he did last night), but that was just the beginning of Mitt Romney’s seemingly undying support for the President’s foreign policies.

Through out the night, the Republican candidate supported the Obama administration’s handling of terrorism, Afghanistan, the decision to go into Libya “and the coalition” the president organized, using diplomatic tactics with Iran, among a host of others.

I expected Romney to endorse the president during his closing speech.

Romney did attempt to steer the conversation to the economy and domestic spending, which completely backfired.

Romney was quick to assert his plan for an increased $2 trillion dollars in military spending reasoning we had fewer ships than in 1916. Obama answered with what will likely be the most memorable response of the night: “Well, Governor, we also have fewer horses and bayonets, because the nature of our military’s changed. We have these things called aircraft carriers, where planes land on them. We have these ships that go underwater, nuclear submarines.”

It is absolutely ridiculous to spend an additional $2 trillion dollars on the military when they are not even requesting the funding. This money would be better used toward job creation, like additional teaching positions… Which brings us to what I can only describe as one of Romney’s most desperate pleas ever to appeal to the American voter.

Mitt Romney loves teachers. Remarking on President Obama’s concern of cuts to the education budget (seriously, at times I forgot this was a foreign policy debate), Romney responded in relation to economic growth “that’s not going to happen by just hiring teachers.” Which tells me Mitt Romney has never read a single jobs plan of the Obama Administration.

Romney quickly proclaimed his love for the education profession, as if he just heard several undecided voters reach a decision and it wasn’t him.

There was no safe haven for the former Governor of Massachusetts last night.

As the debate went on, the more it seemed Romney struggled to just keep his head above water while POTUS was pouring himself another drink. 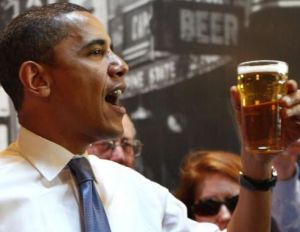 Even though last night Romney seemed to be the cheerleader to Obama’s star quarterback in the foreign policy arena, that wasn’t always the case.

Romney has flip-flopped numerous times on the issues and was called out by the President for doing so:

President Obama accurately concluded: “I know you haven’t been in a position to actually execute foreign policy — but every time you’ve offered an opinion, you’ve been wrong.”

This was a night that showcased Barack Obama as the Commander in Chief and Mitt Romney as a man that is not ready for such a position, unless you are Fox News.

Krauthhammer cites Romney’s biggest moment as when he “devastatingly leveled the charge of Obama going around the world on an apology tour.” This was repeated again in the network’s post-debate coverage this morning.

The highest point for Mitt Romney of the debate, as reported by Fox News, was a lie. In all the speeches mentioned by Romney as part of this “apology tour” it is well documented (and at this point, common knowledge) that the President did not apologize for the United States during this “tour.”

Expect a bump in the polls next week for President Obama.