In the aftermath of the horrific shooting death of 22 year-old Christopher Lane, Fox News has seized the tragedy as a counter point to the mainstream media’s allegedly racially biased coverage of the Trayvon Martin case.  However, their argument is missing one crucial thing… common fucking sense.

Christopher Lane was an Australian baseball player visiting his girlfriend and her family in Duncan, Oklahoma.  While out jogging, Lane was shot in the back and left to die in the street.

Three teens were arrested for the murder.  Duncan Police Chief Danny Ford repeated to the press what 17 year-old suspect Michael Jones told law enforcement regarding the murder.  “The boy who has talked to us said, ‘We were bored and didn’t have anything to do, so we decided to kill somebody.'” 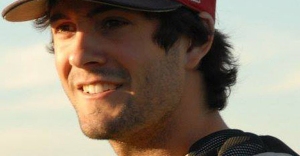 On the August 20th edition of the Fox network’s “Fox and Friends,” the morning hosts decided the most informative way to cover this case was to attack black leaders for their lack of response to the Lane murder.

While speaking about the recent murder, “Fox and Friends” host Brian Kilmeade told the show’s audience, “Right now, we’re going to go to a live shot of Jesse Jackson and Al Sharpton.”  Kilmeade then waited as that shot never occurred just as rehearsed.  Clever girl.

Guest host Anna Kooiman explained: “Oh, wait, we don’t have it.  Why don’t we have it?  Because they haven’t come forward and said anything, are they going to?  Will they?  And should they?”

What do you want them to say?  It was a horrible death that was investigated, arrests were made and charges were filed – which is far more than what occurred in the wake of Trayvon Martin’s murder.  THIS is what Fox News and people posting memes on social media comparing the two cases simply do not understand.

George Zimmerman admitted guilt that night to killing Trayvon Martin.  Yet, he was allowed to go home with no charges pressed against him. Even though the lead detective, Chris Serino, wanted to charge Zimmerman with manslaughter that night, he was prevented from doing so… a problem the Duncan investigators did not encounter.  Only after a national outcry of frustration by the public and the victim’s family were charges filed against Zimmerman six weeks later.  Nearly two months later, he would be found not guilty of any charges.

The suspects in the Christopher Lane case were located within hours of the murder, arrested and charged within days of the crime.  All three suspects are currently being held at the Stephens County Jail.

Possibly realizing that the Lane case does not suffer from the same flaws of the system meant to serve and protect a state’s citizens as Martin’s case did, Fox News and conservative pundits have desperately attempted to make the Lane case one about race.

Fox News and The Daily Caller initially went as far to report that all three suspects in the Lane case were black, when one was actually white.

The Daily Caller later released a correction, referring to suspect Michael Jones as “the one with the lightest skin.”  Nope, he is actually still white.  Nice try.

The Daily Kos, Markos Moulitsas Zúniga’s site, wrote that the Fox Nation section of the Fox News webpage replaced an accurate photo of the three suspects (two black, one white) with an inaccurate photo (all three images of black males) before ultimately taking the photo down.

In one of the network’s latest segments, Robert Zimmerman (brother of George) appeared on Hannity, discussing the “media hypocrisy” between the two cases.

“But for the fact that his social media accounts seem to be by his own hand suggest that he hates white people and he quantifies 90 percent of- I’m sorry – of white people being nasty.”  Zimmerman told host David Webb.

Fox News had previously covered the tweets mentioned by Zimmerman.  The Fox piece on the subject cites the information as originally sourced from a report by The Daily Caller.  However, the Fox article clearly omits Police Chief Danny Ford’s comments regarding the tweets from the original Daily Caller article.  When asked by The Daily Caller News Foundation if the public could expect a hate crime charge due to the tweets, Police Chief Ford responded: “I don’t think there’d be any further charge.”

At no point have members of law enforcement working this case stated or alleged that race played a factor in the Lane murder.  That is real news worth reporting; something Fox News doesn’t actually do. 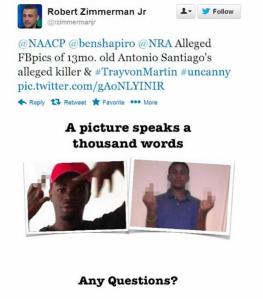 There is nothing like comparing the victim of a violent crime without a criminal background to a man whom allegedly shot and killed a 13 month-old baby during a robbery because they share the same skin color. 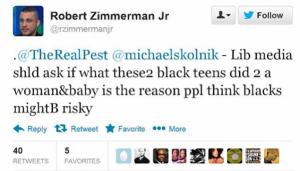 Zimmerman’s tweets quickly got the attention of his brother’s lawyer, Mark O’Mara, who said a in a released statement: “Robert Zimmerman Jr.’s recent comments about race only drive us apart.”

This is the type of individual Fox News finds appropriate to discuss the issue of an alleged biased portrayal of the black race by mainstream media. Fair & balanced, indeed.

The Fox News coverage of this story has been reprehensible, seemingly serving no other purpose other than to rattle the cages of their most extreme viewership.

As Fox News continues to build their own Helter Skelter, Australian ex-Deputy Prime Minister Tim Fischer also commented on the loss of one of his country’s citizens overseas.

“I am deeply angry about this because of the callous attitude of the three teenagers (but) it’s a sign of the proliferation of guns on the ground in the USA.”  Fischer said.

While Fox News called out Al Sharpton and Jesse Jackson over the death of Christopher Lane, Tom Fischer did something Fox News would never dream of, attacked the gun culture of the United States of America.

“You are 15 times more likely to be shot dead in the USA than you are here in Australia,” Fischer told CNN.  “There is murder mayhem on Main Street USA every day of the week, but you hide from that.”

The graph below was published last year in The Washington Post.  Using numbers from the United Nations, the difference between firearm murder in the United States and Australia is astronomical.

Fischer has since warned fellow Aussies to “think twice” before visiting the United States.

I shouldn’t be surprised how Fox has covered Christopher Lane’s death, considering this is the same network that used the Trayvon Martin murder as a call to arms to defend our nation’s guns, not our children. Fox News, an equal opportunity offender.