Following the August 6th Republican debate, Donald Trump attacked moderator Megyn Kelly in the media, sounding more like the drunk guy struggling to steady himself at last call rather than a presidential candidate.

As Kelly spoke these names, laughter rang out from the audience. Which isn’t surprising when you consider this is the same voting electorate that booed a gay soldier in 2011.

Trump ultimately wrote off the comments as “fun” and “kidding,” before responding directly to Kelly herself:

“And honestly Megyn, if you don’t like it, I’m sorry. I’ve been very nice to you, although I could probably maybe not be, based on the way you have treated me. But I wouldn’t do that.”

Trump’s truce didn’t last long. Just hours after the debate, Trump went on a late night Twitter binge, which included a retweet of a post referring to Kelly as a “bimbo.”

The Donald’s reaction to Kelly post-debate and the juvenile laughter over Kelly’s question are worth noting, but Trump’s circus performance seems to have eclipsed the other candidates’ repugnant policy views on women’s healthcare.

Addressing Wisconsin Governor Scott Walker’s desire to make all forms of abortion illegal without exemptions, Kelly questioned if the governor would let a mother die rather than have a life saving abortion and if he was too “out of the mainstream on this issue” for general election voters.

Walker avoids the first portion of the question, simply stating “there are many other alternatives that can also protect the life of that mother.”

During a post-debate interview discussing a mother’s life exemption for abortion, Walker told Fox News’ Sean Hannity: “It’s a false choice. There is always a better option out there.”

Perhaps Walker could share those options with the families of the 650 women that die each year from “pregnancy or delivery complications,” according to the CDC.

Similar ignorant comments were made by Illinois Rep. Joe Walsh (R-IL) in 2012, who claimed there wasn’t “one instance” of abortion saving the life of the mother.

The American Congress of Obstetricians and Gynecologists released a statement debunking Walsh’s rhetoric:

“Contrary to the inaccurate statements made yesterday by Rep. Joe Walsh, abortions are necessary in a number of circumstances to save the life of a woman or to preserve her health.  Unfortunately, pregnancy is not a risk-free life event, particularly for many women with chronic medical conditions.”

A July 2015 Hart Research Associates poll found that 63% of voters oppose defunding Planned Parenthood. A closer look shows that 68% of independents (a voting block Walker would have to chip into to win a general election) oppose defunding.

Walker’s denial of medical science runs rampant among his party. Former Arkansas Governor Mike Huckabee was quick to prove this when he was asked about abortion:

“A lot of people are talking about defunding Planned Parenthood, as if that’s a huge game changer. I think it’s time to do something even more bold. I think the next President ought to invoke the Fifth and Fourteenth Amendments to the Constitution now that we clearly know that the baby inside the mother’s womb is a person at the moment of conception.”

Huckabee is describing the personhood belief, which the medical community, including the American Congress of Obstetricians and Gynecologists, disagrees with.

In 2012, ACOG released a statement on Personhood Amendments:

“Although the individual wording in these proposed measures varies from state to state, they all attempt to give full legal rights to a fertilized egg by defining “personhood” from the moment of fertilization, before conception (i.e., pregnancy/implantation) has occurred.”

ACOG’s concerns of such a proposal becoming law includes the ban of nearly all female contraceptions to the possible prosecution of women who miscarry.

Florida Senator Marco Rubio, who co-sponsored an anti-abortion Act that provided exceptions for the procedure (rape, incest and life of the mother) made it clear those days are long gone.

“What I have advocated is that we pass law in this country that says all human life at every stage of its development is worthy of protection,” Rubio told Megyn Kelly.

Huckabee loaned Rubio a pair of trunks as he dived into the deep end of the personhood pool:

To get a view of the reality Rubio, Huckabee, Walker and other members of the GOP would like to see in America, you can take a look at Paraguay.

The country recently made headlines when it denied an abortion to a ten year-old girl who was raped and impregnated allegedly by her own stepfather.

In a country that has banned abortion in all cases except for the life of the mother, the girl was forced to carry the pregnancy to term. Now age eleven, she gave birth last Friday.

Throughout the all-male debate, the candidates on stage argued against a female healthcare issue decided on over 40 years ago. 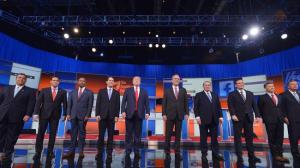 If you are going to discuss a women’s issue, perhaps it should be the Paycheck Fairness Act (which has been blocked 4 times by the GOP) or raising the national minimum wage. 55% of those who would benefit from a wage increase are women.

While the world continues to move forward, the GOP is still determined to find a way back to 1972.