Last week, Democratic presidential candidate Bernie Sanders felt the burn as he came under fire for the things he didn’t say in an interview with the editorial board of the New York Daily News. Specifically, lacking details on how to break up the banks (the cornerstone of his campaign) and what legal statutes the Vermont Senator would use to prosecute the Wall Street execs he blames for the 2008 financial meltdown.

However, it was Sanders’ naive view of the current GOP-controlled Congress that really got my attention. 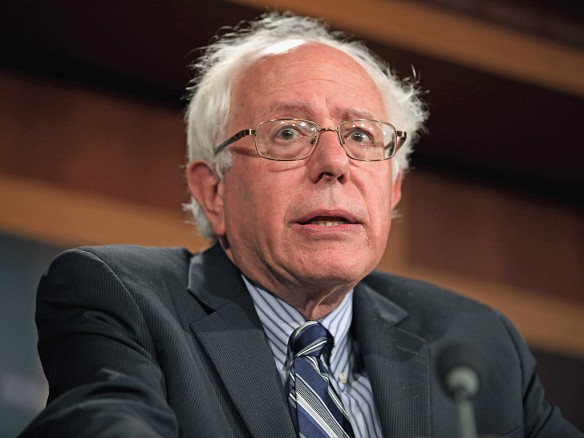 Although Sanders struggles with answering the specifics of how the banks would be broken up, he tells the editorial board the process begins with new legislation, or using the existing laws under Dodd-Frank. Both options ultimately run into the same roadblock: a Congress controlled by the Republican party.

In January, Sanders stated he could break up the banks under section 121 of Dodd-Frank.

“Section 121 of Dodd-Frank isn’t quite as simple as Sanders makes it out to be,” explains American Banker’s Washington Bureau Chief Rob Blackwell.

“It doesn’t allow regulators to just immediately force divestures. First they have to try restricting the ability of the company to offer risky products or imposing conditions on risky activities. Only if that fails can they move to the divestiture stage.”

If Sanders continues using the section 121 method, Blackwell explains Sanders would have to convince four of the seven Fed governors that the banks pose a “grave threat” to the nation’s financial stability, thus warranting their break up (which Blackwell doesn’t believe the current board make-up would do this), followed by the approval of seven of the ten voting members of the Financial Stability Oversight Council.

Seven of the ten FSOC members are heads of agencies nominated by the President.

If by Grabthar’s hammer, Sanders were able to get the support he required of the Fed governors, he could hand pick seven agency heads who would favor his plan… but they have to be approved by the Senate.

Under the current GOP-controlled Senate, it’s almost a certainty Sanders would not have his nominees approved; nor under the current conditions would Congress pass new legislation with the sole purpose to break up the banks.

Sounding as if he has been living in another universe for the past seven years of the Obama administration, Sanders explained how he would get the results from Congress that POTUS could not:

“My major job is to mobilize the American people to demand that Congress listen to them and their needs rather than just the big money interests. That’s how you make change take place.”

Sanders warns Republicans and Democrats if they were to vote against the will of the American people, “they will pay a very heavy price.”

Sanders missed a lot while trying to outrun the Lectroids across the 8th dimension.

In April 2013, Senate Republicans blocked new gun control measures at a time when the American public overwhelmingly supported the legislation in the wake of the Sandy Hook massacre. The following year, the GOP took back control of the Senate.

When asked by Maddow if Sanders would fundraise for down-ballot candidates of the Democratic Party during this election year, Sanders responded: “We’ll see.”

While Sanders shoots himself in the foot, frontrunner Hillary Clinton has been fundraising to secure the support in Congress she knows she’ll need.

The fund can accept the maximum allowed primary contribution by an individual of $2,700 and larger amounts for the Democratic National Committee ($33,400) and state parties ($10,000 each).

As of this writing, the Hillary Victory Fund has raised nearly $27 million and is affiliated with 32 state Democratic parties.

On March 27th, Sanders strangely lashed out at Clinton and the attendees of an upcoming Los Angeles fundraiser at the home of actor George Clooney and his wife, Amal. The event costs $33,400 to attend (hello, DNC!).

“It’s a criticism of a corrupt campaign finance system, where big money interests – and it’s not Clooney, it’s the people coming to the event – have undue influence on the political process.”

Sanders must also be a From Dusk till Dawn fan.

The “people coming to the event” who Sanders is concerned about are Democratic supporters. The same people that would likely vote for him, if he were the nominee.

It is such a bizarre attack from the Vermont Senator – especially considering the funds will be going to support Congressional campaigns seeking to reclaim the Senate and confirm justices who can ultimately reverse Citizens United.

Sanders’ lack of down-ballot candidate support has already had negative effects on the April 5th Wisconsin Supreme Court election, which was the same night as the state’s Democratic primary.

An exit poll by DecisionDesk and BenchMark Politics showed that up to 15% of Sanders supporters simply ignored the Supreme Court race.

“There was an enormous drop-off,” DecisionDesk’s Brandon Finnigan told The Washington Post. “There was a substantial number of voters in that voted for Sanders, then for nothing else.”

“21% of Sanders supporters either didn’t vote or voted for Bradley. If you adjusted for Bradley winning, that number prob [sic] grows.”

As of Wednesday, Politico is reporting Sanders has finally decided to fundraise for three progressive down-ballot candidates…who have endorsed him. I guess it’s a start?

Perhaps the Sparrow Whisperer is finally realizing without a Democratic Congress to pass his policies, Sanders’ “political revolution” will be DOA before he takes his first steps into the Oval Office.