This is a tough one to write. In the wee hours of November 9th, it was announced Donald Trump would be our nation’s 45th President of the United States. Typing that sentence, I feel as if I’m living in the world of Demolition Man… and we all got served a rat burger.

I’m struggling to understand the reasoning behind supporting a man who established his political career by attempting to undermine the presidency of our first black President, and would go on to run a campaign attacking other minorities and sexual orientations. Additionally, there seems to be a complete lack of understanding the most simplest aspects of government (reportedly Trump didn’t understand he had to hire his own White House staff).

“People voted for Trump because they felt they have not had representation in Washington for a long time,” Georgia freelance writer Janet Flanigan told the LA Times.

It’s difficult to pin Hillary Clinton’s loss on one issue. However, post-election night’s biggest surprise may have been white women (like Janet Flanigan) overwhelmingly supported Donald Trump. According to FiveThirtyEight’s Clare Malone, it would also be a contributor to Clinton losing Florida.

For eight years, Obama has defended women’s healthcare and reproductive rights. He vetoed a bill in January which would have defunded Planned Parenthood. He has been a strong advocate for gender pay equality. One of his first accomplishments as POTUS was signing in the Lilly Ledbetter Fair Pay Act. He reauthorized the Violence Against Women Act. The President’s landmark healthcare law fully covered multiple forms of contraception and 22 preventative services for women.

He presented a comprehensive jobs bill to Congress in 2011 called the American Jobs Act. It was fully paid for by closing corporate loopholes and a tax increase on the wealthiest incomes. It was also blocked by Congressional Republicans.

You may not have had a parade every Saturday morning to commemorate it, Janet, but our current President fought for you every day.

We would be foolish not to recognize that Trump’s calls of bringing back American jobs were effective… but they weren’t realistic.

Trump mentioned Indianapolis-based company Carrier multiple times from the campaign trail, claiming he would place tariffs on the company if they went through with plans to relocate to Mexico.

“If he [Trump] doesn’t pass that tariff, I will vote the other way next time,” Trump supporter and Carrier employee Nicole Hargrove told The New York Times.

The Friday after Trump’s election win, Carrier reiterated the move to Mexico was in motion.

In 2012, it was Democratic Senators John Walsh and Debbie Stabenow who introduced the Bring Jobs Home Act. The legislation would have ended tax breaks for companies which outsource jobs out of the country. The GOP blocked the Act in 2012 and in 2014.

Painting Clinton as a job killer, Trump often presented himself as a savior of the coal industry:

“We’re going to get those miners back to work… the miners of West Virginia and Pennsylvania, which was so great to me last week, Ohio and all over are going to start to work again, believe me.”

Don’t pack a lunch yet.

According to Nick Carter, the interim president of the Kentucky Coal Association: “I would not expect to see a lot of growth because of the Trump presidency.”

There is no known Plan B for how the Trump administration will benefit these people he effectively misled for votes.

However, Clinton did have a proposal for miners. Clinton’s $30 billion policy would have protected the benefits of the nation’s miners and invested in job creation. That fact that the public did not hear more of this proposal is a failure on Clinton’s part.

What seems to be getting lost in the conversation though, is the responsibility of the voter to make an informed decision.

Visiting the newsfeed of your preferred social media site will likely show friends and family sharing news stories from such sources as Red State Watch, the Conservative Tribune, or even Occupy Democrats. All of which are fake news sites. Here’s a tip: never trust a news site with a party affiliation in the name.

How bad is the spread of fake news? After the election, Google’s number one result when people searched ‘final election results’ was for a fake news site posting fake total vote numbers.

A Pew survey from May found that 67% of Americans get news from social media; 44% get their news from Facebook. 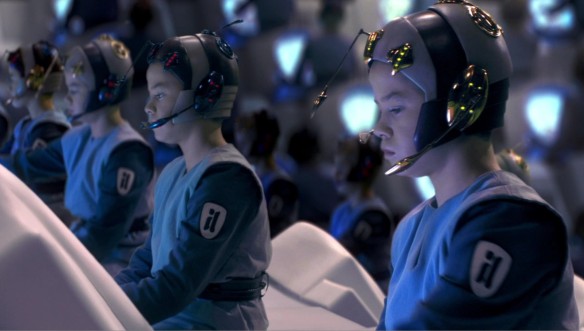 I’m certain fake news influenced the outcome of this election. I just don’t know to what extent.

Nearly a week after the results, Google and Facebook have announced they will no longer allow ads from fake news sites on third party apps or websites. That’s far from the only (real) news.

Trump’s win was widely celebrated by the white supremacist movement, including former Grand Wizard David Duke. “Make no mistake about it, our people have played a HUGE role in electing Trump,” Duke tweeted last Wednesday morning. This white pride celebration did not end there.

Since winning the election, Trump has named white nationalist Steve Bannon as chief strategist, a decision which was praised by the chair of the American Nazi Party. Bannon is not the only member of Trump’s White House transition team with ties to white nationalism.

Kobach has said the Trump administration is discussing a national registry of Muslims similar to the National Security Entry-Exit Registration System (NSEERS). Immigrant registration under NSEERS ended in 2003, but not before civil rights groups called attention to the system’s bias of targeting Muslims.

During the primaries, Trump had said he would implement a national database of the country’s Muslim population.

As I write this, Trump has offered the position of National Security Adviser to retired Lt. Gen. Michael Flynn. Flynn was a strong supporter of Trump during the campaign and often appeared as a surrogate for the candidate on cable news. Flynn also has a history of anti-Muslim statements, including writing “Fear of Muslims is RATIONAL” on a retweet of a hateful video claiming Islam wants “80% of humanity enslaved or exterminated.”

This is not normal.

Since the election, incidents of hate have greatly increased across the country. Between November 9th and November 14th, the Southern Poverty Law Center has “collected 437 reports of hateful intimidation and harassment.”

When Trump was asked about this issue during his 60 Minutes interview last Sunday, he told interviewer Lesley Stahl he had only seen “one or two instances” of racial hate. It’s good to know he’s paying attention.

Since September, Prof. Allan Lichtman has predicted a Trump win. Now, Prof. Lichtman believes Trump will eventually be impeached by the GOP-controlled Congress and replaced by VP Mike Pence. This scenario is the fuck’n Kobayashi Maru of American politics.

We can do things RIGHT NOW.

As it became clear Clinton’s firewall was crumbling, my heart broke as the media showed live images from the Javits Center where Hillary Clinton was to give her victory speech in New York.

Watching as the most qualified presidential candidate in modern times was passed over for a man with no experience in this field, was not only shocking, but likely a relatable experience for many of the women in the audience.

Like many of you, I lost sleep for nights after the result, concerned of the potential erasing of President Obama’s legislative legacy. I had anxiety about the potential fallout on the LGBTQ community and people of color under a Trump presidency. My eyes watered when I thought of the tear streaked faces of the women of the Javits Center, standing under a glass ceiling which would remain intact. Yet, I’m hopeful.

Trump won the electoral college but Hillary Clinton won the popular vote. Her lead over Trump has surpassed a million and is expected to widen further.

Although Clinton will not be our president, Americans chose science, decency and equality on November 8th.

The day after the election, Jezebel put together an incredible list of organizations which benefit the environment and communities likely most negatively affected by the policies under the incoming administration. You can participate by donating money or your time to an organization of your choice here.

Get involved in the political process. Phone bank or canvass for your preferred local candidates… or maybe YOU should run for office!

I have been inspired by the wave of protests against Trump’s hateful, divisive campaign rhetoric. Keep it going strong, America. 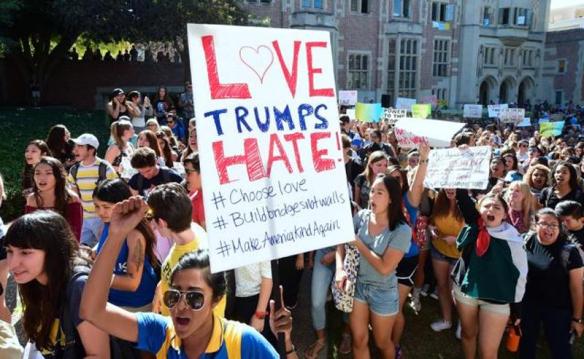 As President-elect, Trump owes the communities he attacked an apology, full condemnation of the attacks and harassment currently taking place and assurances his administration will be an inclusive one.

To all my friends and readers of color, the female gender and the LGBTQ community: I love you and you are not alone.

This is a frightening time for anyone that is not a straight white male. We can get through this by supporting and watching out for one another.

We’re in this together.