How bad has week four of the Trump administration been? A member of Trump’s Mar-A-Lago club took a picture with the nuclear football and posted it on social media… that’s not even the most troubling event of the week.

On Monday, it was reported President Trump had taken a national security call concerning North Korea’s launching of an intermediate-range ballistic missile in the crowded dining area of Trump’s Mar-A-Lago club.

The dining location was not secure and guests even took pictures as Trump and his team went over possibly classified documents in full view of dining guests.

Three-month club member Richard DeAgazio even took a picture with the nuclear football and identified the aide who carries it. How easy is it to get access to the football? Depends on your paycheck.

Since winning the presidency, Trump has doubled the membership rate to join Mar-A-Lago to $200,000. Now guests not only have access to the president, but also other world leaders. That weekend, Trump arrived with Japan’s Prime Minister Abe as if he were a special attraction at a petting zoo. With a plot like this, a season of 24 wouldn’t even last a full hour.

This could have been the story of the week… until the resignation of Trump national security adviser Michael Flynn on Monday night.

Last week, The Washington Post broke the story when speaking to current and former U.S. officials who told reporters Flynn had discussed sanctions placed against Russia under the Obama administration with Russian ambassador Sergey Kislyak.

Flynn and Kislyak spoke on December 29th: the same day President Obama announced new sanctions in retaliation for Russia meddling in the U.S. election (in addition to sanctions previously placed on Russia for the invasion of Crimea).

Anonymously, U.S. officials told WaPo Flynn had “urged Russia not to overreact” to the sanctions and that they would be reviewed after Trump won.

Russian President Vladimir Putin announced on December 30th that he would not retaliate against the U.S. for the move (which raised eyebrows within the Obama administration).

Trump would respond to Putin’s lax response with this ass-kissing tweet:

On the day after the WaPo story broke, Trump was asked if he was aware of the report on Flynn. He responded: “I don’t know about that. I haven’t seen it.” Of course, it would turn out he did know about it. He knew about it for weeks.

On Monday, it was reported that acting Attorney General Sally Yates notified the White House of her concern that Flynn was susceptible to blackmail from Russia over his discussions with Kislyak. That occurred on January 26th. Flynn would not resign until the night of February 13th.

Flynn’s possible discussions of sanctions with Russia have been mentioned in the media previously, but have never been publicly verified by officials until last week.

“What I can confirm, having spoken to him about it, is that those conversations that happened to occur around the time that the United States took action to expel diplomats had nothing whatsoever to do with those sanctions.”

Pence did not find out about Flynn’s indiscretions until February 9th… when he read it in The Washington Post.

Judging from what we know, it looks like Trump was simply going to keep this information within his tight circle … until the media reported it.

Flynn wasn’t alone. On Tuesday, four current and former U.S. officials confirmed Russian operatives were in constant contact with people associated with Trump’s campaign and business in the year prior to the election.

As of now, there is no evidence members of Trump’s camp were involved in the DNC hacking. The investigation is ongoing.

On Thursday, Trump gave a one hour and fifteen minute unhinged press conference eviscerating the press with such gems like “The leaks are absolutely real. The news is fake.” Yeah, I can’t make sense of that one either. 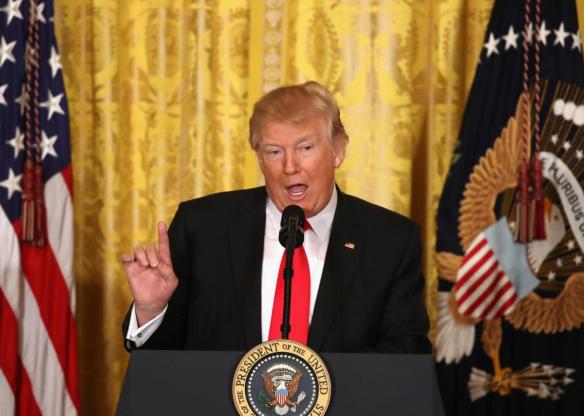 Trump also divulged he didn’t ask for Flynn’s resignation because he was undermining Obama’s policy, but that he lied to Pence. This makes absolutely no fucking sense. At this point, Trump knew for weeks Flynn had lied to Pence.

Trump actually defended the retired Lt. General during the presser, telling reporters of his briefing with Yates about Flynn: “Doesn’t sound like he did anything wrong.”

Trump doubled down on this nonsense when he said of Flynn’s discussions: “Mike was doing his job…I would’ve directed him to do it if I thought he wasn’t doing it.”

After the Paul Verhoeven-worthy press conference, news came out that Flynn lied to FBI investigators last month when he told them he had not discussed sanctions with Russia.

With a turbulent four weeks that has included a discriminating travel ban, a failed military operation, an attack on the judicial branch and now the resignation of a high ranking official just 24 days in, this administration has dished out more fuckery than a round of Tribbles speed dating.

The questions we all should be asking are: What did Trump know and when did he know it?