On Sunday, VP Mike Pence visited the site of the Dachau concentration camp in Germany. Pence tweeted: “Moving and emotional tour of Dachau today. We can never forget atrocities against Jews and others in the Holocaust.”

Where was this sentiment last month when the Trump White House removed any mention of the Jewish people from the statement commemorating International Holocaust Remembrance Day?

Of the three brief paragraphs which made up the January 27th statement, there is no mention of the millions of Jews who perished or the anti-Semitism which led to their deaths.

Since becoming president, Trump has failed to address the communities who fear they will not be accepted by his administration. He has also failed to condemn specific attacks against them as well.

Last week, Trump had three opportunities to address and condemn the rise of anti-Semitism in the country. He failed to do so every time.

On Wednesday, Trump held a press conference with Israeli Prime Minister Benjamin Netanyahu. When asked by an Israeli reporter about the uptick of anti-Semitism incidents in the U.S. and the Trump administration “playing with xenophobia and maybe racist tones,” Trump responded by bragging about his electoral college win. Seriously:

“Well, I just want to say that we are, you know, very honored by the victory that we had. 306 electoral college votes. We were not supposed to crack 220. You know that right?”

Who gives a shit? For the record, when Congress certified the vote Trump won 304 electoral votes… not 306. 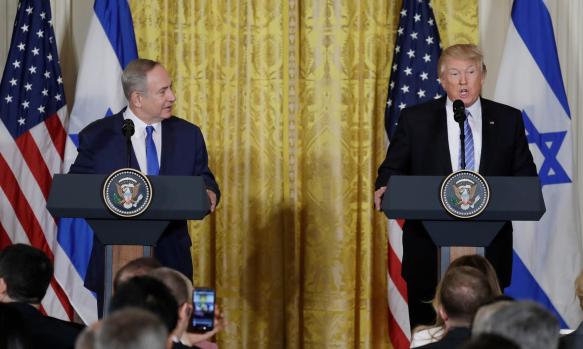 Trump completely ignores the criticism of his administration and instead ends with a vague bullshit “you’re going to see a lot of love” answer. Feel free to start anytime.

On Thursday, Trump went solo as he gave an hour and fifteen minute press conference that produced enough material to guarantee the SNL writer’s room is out in time for happy hour for weeks to come.

Nearing the end of the presser, President Trump looked for a “friendly reporter” (aka an easy question). He chose Jake Turx of the Orthodox Jewish publication Ami Magazine. Possibly having seen yesterday’s response, Turx put on the kid gloves and began stroking the president as if he were a Persian cat:

“Despite what some of my colleagues may have been reporting, I haven’t seen anybody in my community accuse either yourself or anyone on your staff of being anti-Semitic. We understand that you have Jewish grandchildren.”

Trump interrupts once Turx asks how the administration plans to address the increase of anti-semitic acts, including the 48 bomb threats against Jewish centers in the U.S.

“It’s not a fair question. Sit down,” Trump instructed Turx. It’s all downhill from there.

“Let me just tell you something, that I hate the charge. I find it repulsive,” Trump lectures Turx. If you’re wondering what fucking question Trump is answering, you’re not alone. It’s certainly not the one Turx asked. Trump wraps up his response calling Turx’s inquiry “very insulting” (which it clearly wasn’t).

This is Trump’s narcissism on full display.

Turx’s question addressed the fear of a community of American citizens… to which Trump fails to respond. It’s not that Trump is ignoring it; he doesn’t even hear it.

The president makes the question about himself. He responds to the very mention of anti-Semitism (or racism) as an attack against him. Rather than address the concerns of those who are experiencing attacks and harassment due to hate crimes, Trump is more concerned with how he is perceived. Trump’s ego eradicates any sense of empathy.

The second to last question belonged to an unnamed reporter attempting a follow-up on Turx’s question regarding the “rising anti-Semitism around the country, some of it by supporters in your name.” The kid gloves are off!

Trump has a culprit this time:

“…can I be honest with you? And this has to do with racism and horrible things that are put up, some of it written by our opponents. You do know that? Do you understand that?”

“They’ll do signs and they’ll do drawings that are inappropriate. It won’t be my people. It will be the people on the other side to anger people like you.”

“My people?” Trump must have tried to look at a blueprint for unifying the country and just said “fuck this.”

In true Trumpian fashion, he offers zero evidence to back up his claim that “the other side” (I held off on the Poltergeist II joke) is behind the harassment of the nation’s Jewish communities.

During his election night victory speech Trump claimed “I will be president for all Americans.” As week five begins, many Americans are clearly still wondering how much of this statement holds true.