Wilders understands that culture and demographics are our destiny. We can't restore our civilization with somebody else's babies. https://t.co/4nxLipafWO

King is referencing Party for Freedom candidate, Geert Wilders, who is running for Dutch Prime Minister. My personal belief of political organizations which use “family” or “freedom” in their name is that it increases their likelihood of being hateful cesspools (e.g., Focus on the Family, Family Research Council, American Freedom Party, American Freedom Union). This applies to European groups as well. Party for Freedom doesn’t disappoint.

What sounds like a Wyld Stallyns cover band is actually an Islamaphobic political party. Party for Freedom proposes banning all mosques and Islamic schools. Echoing Donald Trump’s campaign call to ban all Muslims, the party wants to shutdown the Netherlands’ borders to all immigrants from Islamic countries.

In 2011, Wilders advocated for a “towel-head tax.” The tax would have been paid by Muslim women who wore a veil.

Sunday’s tweet is the most blatantly racist comment to come from King yet, but it’s hardly the first.

Rep. King has previously compared immigrants to dogs, argued white people have contributed the most to civilization and propagated the racist birther conspiracy theory.

This isn’t King’s first mentioning of Wilders. Last September, King tweeted a picture with the “Dutch Trump” and Frauke Petry, leader of Germany’s Alternatives for Deutschland. 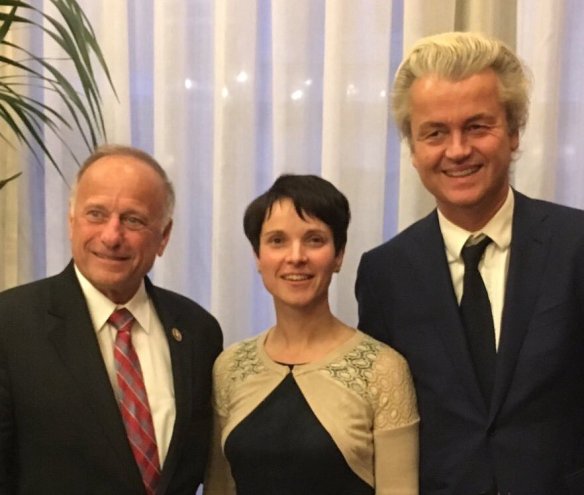 The AfD is a political party built on nationalism and xenophobia. It has also called for banning mosques. Like Trump’s White House, the AfD has attacked the country’s media using the Nazi-era term “Luegenpresse” (lying press). Last year, Petry called for police to shoot refugees to prevent them from entering Germany.

You’re not alone if you think that sounds like something said by a South African henchman from Lethal Weapon 2.

King’s sentiment expressed in his September tweet is a common one you can find on such white supremacist sites as The Daily Stormer.

I want to tell you that Iowans rejected this hate, but instead King was re-elected to his U.S. House seat in November.

Iowa City holds an annual gay pride parade and was rewarded a perfect score of 100 by The Human Rights Campaign as a perfect place to live for members of the LGBTQ community.

The community has come together on multiple occasions to stand up for equality and against injustice as it did during a 2012 rally remembering slain black teen, Trayvon Martin. Recently, the city held its own sister march to the Women’s March on Washington in January.

Last month, more than 1,500 people rallied at the city’s pedestrian mall to stand in support of those targeted by the Trump administration’s Muslim ban.

Every time I read of the latest marches and see the images of the people who braved the winter cold to make their voices heard in downtown Iowa City, I am even more optimistic for what our future holds.

I love this state and I could not be more proud to be an Iowan.  I don’t recognize the Iowa I know in Rep. Steve King.