Like the Trump administration’s previously themed weeks, “Made in America” failed to take the media by storm, concluding with the President’s Mar-a-Lago Club applying for 70 additional visas for foreign workers. However, it was another failure which overshadowed the White House’s attempt to control the media narrative: Donald Trump’s negotiating of health care reform. 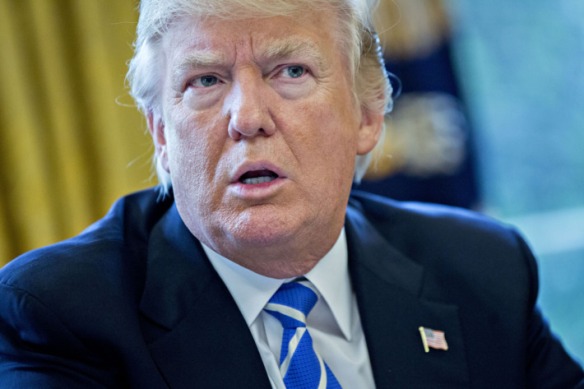 Monday kicked off with the Trump-endorsed GOP health care plan collapsing like the Brooklyn Bridge in a Roland Emmerich film. While Trump was working with GOP Senators to build support for the bill over dinner at the White House, Senators Jerry Moran and Mike Lee announced they would not be supporting the Better Care Reconciliation Act. The senators joined Kentucky’s Rand Paul and Maine’s Susan Collins in opposing the BCRA, killing the bill.

The bill’s failure among the GOP’s own rank and file led Senate Majority Leader Mitch McConnell to call for a repeal vote with a 2 year-delay replacement plan implementation. It was an action Trump quickly supported via Twitter… and it would also fail within 24 hours of being announced.

For the bill to successfully pass the Senate, McConnell can only afford to lose two GOP votes. On Tuesday, Republican Senators Susan Collins, Shelley Moore Capito and Lisa Murkowski came out in opposition to McConnell’s latest proposal.

On the same day, Trump would tweet support for our nation’s health care system to fail on its own; an action which would harm millions of Americans:

As I have always said, let ObamaCare fail and then come together and do a great healthcare plan. Stay tuned!

As an individual, Trump’s lack of empathy is staggering. As POTUS, it’s inexcusable.

The non-partisan CBO found the repeal and delay plan would cut Medicaid by $842 billion and increase the nation’s uninsured to 17 million by next year. Premiums would increase by 25% in 2018 and then 50% in 2020.

Using the reconciliation process, the GOP only needs a simple party majority of 50 votes to pass their health care legislation (they currently hold 52 seats in the Senate). On Friday, the parliamentarian found the BCRA violated the Byrd Rule. Specifically, the language used in the Act to defund Planned Parenthood and the “abortion restrictions on the premium tax credit and the small business tax credit.”

If these provisions remain, the BCRA will require 60 votes to pass, making it DOA in the Senate. This bill has now died more times than Kenny in a season of South Park.

On Wednesday, Trump demanded senators cancel their August recess until a plan is passed:

“We have to stay here. We shouldn’t leave town, and we should hammer this out and get it done.”

Trump left town this weekend to play golf and according to Newsweek, the President is likely to take an 18-day vacation beginning August 3rd.

The Senate is expected to vote to debate on the health care bill as early as Tuesday, but as of this writing, Senate Republicans don’t even know which version will be brought to the floor.

Will this version of the bill include the wretched Ted Cruz amendment? Under the Cruz amendment, as long as insurers offer one plan which abides by the current Obamacare regulations, they can offer other plans which don’t.

This is how BlueCross BlueShield and America’s Health Insurance Plans described the Cruz amendment:

“It’s simply unworkable in any form and would undermine protections for those with pre-existing medical conditions, increase premiums and lead to widespread terminations of coverage for people currently enrolled in the individual market.”

Sounds like a winner. The CBO has yet to complete its scoring of the BCRA with the Cruz Amendment.

This week will be critical to the GOP passing a repeal-and-replace bill (if that’s what they will be voting on) and President Trump could not be less engaged.

Unlike President Obama in 2009, Trump has not held a single press conference or town hall to garner support for the legislation. Considering his administration is actively sabotaging our current health care system, he should be working harder on the replacement.

The Trump administration has closed contracts in 18 cities which assisted people who were signing up for coverage through the ACA exchanges. The open-enrollment period to shop for coverage has been cut nearly in half to just 45 days.

Trump’s Department of Health and Human Services has used taxpayer funds reserved for promoting open-enrollment to fund testimonial videos of people who have claimed to have been harmed by the Affordable Care Act.

Obamacare is not in a death spiral; the White House is strangling it.

Trump’s poor negotiating skills have never been more on display than they have this week. More concerning, he can’t recognize a shit deal when he sees one… and that’s being kind.

As I’ve written before, Trump doesn’t know anything about this policy. Watch his meeting last Wednesday. He has to read his talking points off a sheet of paper. Compare this footage to any of the numerous hours of Barack Obama attending town halls discussing the Affordable Care Act with the American people or the health care summit at Blair House. Obama understands the bill front to back… without a cheat sheet.

The reason Trump can’t get the support he needs within his own party is because the Better Care Reconciliation Act is rotten at the core. It’s a tax cut for the wealthy before it’s a health care bill.

Update 7/25/2017: America still has no idea which version of the bill it is, but the Senate has voted to move forward on debating the GOP health care plan.