Days after his inauguration, Donald Trump issued an executive order banning travel from seven Muslim-majority countries. The Muslim Ban was the first major policy Trump enacted rooted in fear and bigotry. His decision to rescind the Deferred Action for Childhood Arrivals (DACA) program is just his latest action marinated in hate. 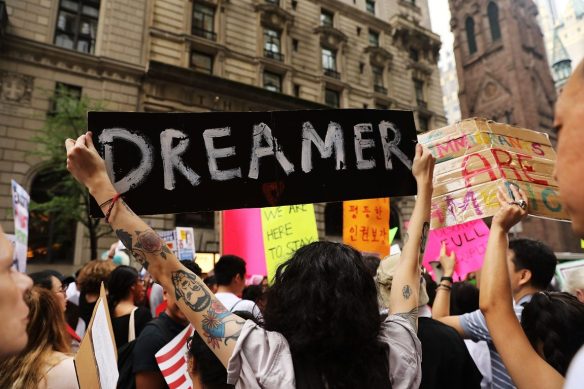 Established under President Obama in 2012, DACA allowed children of illegal immigrants to apply for deferment (not amnesty) from deportation through a two-year work permit.

To qualify for DACA, you must:

The median age of DACA recipients (aka DREAMers) entering our nation is found to be just six years old. For many, America is the only country they’ve ever known as home.

Why would Trump take such a callous action? In addition to Trump’s continued erasure of Obama’s legacy, 79% of DACA recipients are from Mexico.

The real estate mogul constructed his current political career on a foundation of racism when he championed the birther movement against Barack Obama in 2011.

Happy with the results of pandering to the worst in America, Trump would go on to infamously launch his presidential bid in 2015 by villainizing the majority of illegal Mexican immigrants as “rapists” and drug dealers.

Attorney General Jeff Sessions would happily apply this fear-mongering talking point to DACA when he announced Trump’s decision to end the program:

“Failure to enforce the laws in the past has put our nation at risk of crime, violence and even terrorism.”

I wonder how much it hurt when Sessions pulled this out of his ass.

Considering you need a nearly spotless criminal record to even be considered for DACA, this makes no sense.

The reality is that DACA recipients are people like paramedic Jesus Contreras and Hurricane Harvey volunteers Oscar Hernandez, Karla Perez and Alonso Guillen (who drowned while on a rescue mission).

Someone should also brief Trump’s hateful Keebler Elf that 900 DACA recipients serve in the military.

Sessions nearly throws his back out when he shovels this shit:

“It [DACA] also denied jobs to hundreds of thousands of Americans by allowing those same jobs to to illegal aliens.”

Sessions doesn’t reference a study or analysis to back up this claim, because one doesn’t exist.

The American Immigration Council found there is no relationship between immigration and unemployment. If Sessions’ far-right talking point were accurate, the council argues states with a high immigrant population would also experience a high unemployment rate.

However, there is an economic downside to DACA… when it’s eliminated.

The Cato Institute (far from a left-leaning organization) found deporting the DACA recipients would cost the government $60 billion and reduce our nation’s economic growth by $280 billion over ten years.

In true leading from behind fashion, the White House has given Congress six months to find a solution to DACA. What happens if they don’t find a solution? We don’t know. The only thing that is certain, the President has turned the next six months for the DACA recipients into an unpredictable hell.

If you ever wondered what it sounded like to turn 800,000 lives into a bargaining chip for a border wall, there it is.

At the request of House Minority Leader Nancy Pelosi, Trump tweeted the following reassurance to the DREAMers two days after Sessions announced the end of the program:

For all of those (DACA) that are concerned about your status during the 6 month period, you have nothing to worry about – No action!

In April, Trump told the DREAMers to “rest easy.” On the Friday before Trump rescinded DACA, he told the media “We love the DREAMers.” When asked what he would tell those who are scared of POTUS ending DACA, Trump responded: “I think the DREAMers are terrific.” He would later add he had a “great feeling for DACA.”

Trusting Trump on DACA is like recommending Pennywise the Dancing Clown for children’s birthday parties.

The nation has nothing to gain by ending DACA. Trump sees otherwise.

Following his Charlottesville statements and the pardoning of Sheriff Arpaio (a man whose guilty conviction stemmed from racially profiling Latinos), Donald Trump continues to service a white supremacist agenda for a faction of his base.

Ending DACA is yet another slab of red meat to a base which, one could argue, has been overfed in recent weeks.

The only law the DREAMers ever broke was following their parents into this nation. They love this country and are contributing positively to our society (even sacrificing themselves for their fellow Americans in the face of natural disasters like Hurricane Harvey).

The most important thing you can do now is contact your state’s representatives and senators to voice support for the DACA recipients.

You can find contact information for your state’s elected officials here.

This is Alonso Guillen. Although he was not a citizen, this is what an American looks like.