Yesterday saw the historic announcement of a sitting United States president endorsing same-sex marriage for the first time.  Recently, the current administration has responded to numerous inquiries about the president’s stance on the issue since Vice President Joe Biden fully endorsed same-sex marriage on last week’s episode of “Meet the Press.”

This moment was long overdue, and regardless if it was Vice President Biden’s endorsement or the approval of North Carolina’s discriminating Amendment 1 law that initiated the President’s declaration, I’m glad it’s finally here.  One network, not so much.

Fox News jumped in on the announcement, not with open arms but with a hard right elbow that would make Randy ‘The Ram’ Robinson proud.

This is the networks initial coverage of the President’s endorsement: 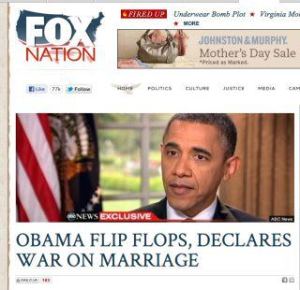 Fox News has declared war more times than the United States of America.  Does anybody remember last year’s war on Christmas?  How does one exactly declare a war on marriage?  Living in a state that has legalized same-sex marriage, I can testify that heterosexual marriage is still around and healthy as ever.

Fox quickly pulled the image in a rare moment of common sense.

The Obama Administration has a history of supporting legislation that benefits and protects the LGBT community. This includes the repeal of Don’t Ask, Don’t Tell, extending benefits to same-sex partners of federal employees and expanding the Hate Crimes law to include sexual orientation. It is truly great to see the President finally come out in support of same-sex marriage.

Today is a good day. Go get yourself a beer.