Last week, retired neurosurgeon Ben Carson and former Hewlett-Packard CEO Carly Fiorina flagged down the Republican clown car as they each announced their candidacies for the 2016 presidential election.

Interestingly, neither candidate has ever held political office (this is Carson’s first political campaign). 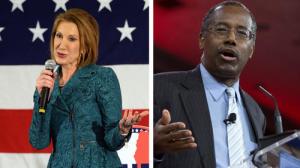 “Our founders never intended us to have a professional political class,” Fiorina states as the opening line in her announcement video. “They believed that citizens and leaders needed to step forward.”

“It is not possible that an assembly of men called for the most part from pursuits of a private nature, continued in appointment for a short time, and led by no permanent notice to devote the intervals of public occupation to a study of the laws, the affairs, and the comprehensive interests of their country, should, if left wholly to themselves, escape a variety of important errors in the exercise of their legislative trust.” Madison wrote discussing the senate and its members in number 62 of The Federalist papers.

Literally the first line Fiorina spoke as a presidential candidate is bullshit.

“Obamacare needs to be repealed. The law itself is longer than a Harry Potter novel,” Fiorina told reporters. Well, you can’t say she doesn’t have a strong case.

Fiorina spoke out against the Affordable Care Act during her 2010 California Senate campaign via her official site: “it’s essential that decisions about care stay in the hands of patients, their families and their doctors.” Oh, and your employer.

“A lot of women, me included, are sick of the ‘war on women’, and we saw it in spades on Monday after the Hobby Lobby case,” Carly told CNN after the ruling. “The women of Hobby Lobby had access to contraceptive care through their insurance plan before Obamacare. They have access to contraception free – 16 forms of it – after this ruling. But somehow this is the long arm of business and the Republican Party reaching into the body of women. It’s ridiculous.”

What Carly seems to completely miss is the Burwell v. Hobby Lobby ruling established a dangerous precedent that a closely held for-profit corporation can refuse to follow a federal law based on a religiously held belief. 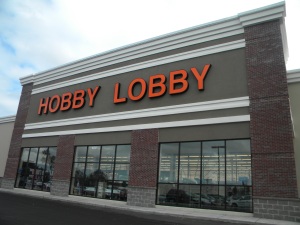 Hobby Lobby objected to the coverage of emergency contraception, such as morning-after pills like Plan B, believing these were abortion-inducing methods. However, that completely goes against the actual science.

If the pro-life Carly were to simply visit the American Congress of Obstetricians and Gynecologists official site she could read the following:

Hobby Lobby’s argument was based on a complete misinterpretation of science and not only does Carly not seem to understand this, she doesn’t care.

Fiorina currently doesn’t have a healthcare plan proposal on her presidential campaign site, but at an event hosted by the Committee to Unleash American Prosperity she said: “Let’s try the one thing we’ve never tried in health care – a free market.”

“I think the answer here is to allow states to administer high-risk pools to help those who are truly needy,” Fiorina would later elaborate. 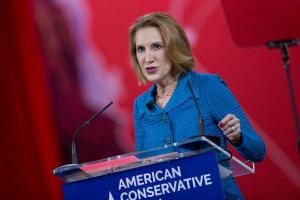 In 2013, the Republican Study Committee endorsed the American Health Care Reform Act. The Act would repeal the ACA and expanded state high-risk pools in its place.

“Levitt says this would, in fact, provide protection for some with preexisting conditions, but it would be “much more limited” than Obamacare’s protections. Ultimately that isn’t nearly enough money to fix the problem when compared to Obamacare’s subsidies. Obamacare also places stricter limits on industry discrimination to “make insurance more accessible to people who are sick” and to “make insurance pricing more uniform,” Levitt says.”

Last year, the Chicago Tribune with Kaiser Health News, ran a piece discussing the effects of Obamacare on cancer patients. One of the individuals interviewed was cancer survivor Fiona O’Connell.

O’Connell lost her job and became uninsurable once her COBRA benefits were depleted. She enrolled into her state’s high-risk pool and was paying up to $1,200 a month.

She has since enrolled into a plan under the Affordable Care Act and now pays $332.95 a month.

Carly Fiorina, the candidate who wants to replace Obamacare with high-risk pools, is a breast cancer survivor.

Thanks to Carly’s Facebook page, we know she intends to tackle tax reform (and likes The Doobie Brothers). Carly writes: “It’s time to move to zero-based budgeting and simplify the tax code.”

A zero-base is essentially re-approving every expense/function from scratch, rather than simply approving changes and accepting any renewals.

In 2013, former Reagan advisor Bruce Bartlett published a graph comparing a study on the 2010 Simpson/Bowles budget proposal that used a zero-based method to an estimate of 2015 taxes:

“As one can see, those with lower and middle incomes would see a tax increase, while the wealthy would get a tax cut,” Bartlett writes.

“The idea that we can wipe the slate clean and start from scratch is ridiculous pie-in-the-sky thinking and an abrogation of responsibility by the Senate’s two principal leaders on tax issues.”

This week, Fiorina, who previously supported a constitutional amendment to ban same-sex marriage, has taken a different stance on the issue: “I think the Supreme Court ruling will become the law of the land, and however much I may agree or disagree with it, I wouldn’t support an amendment to reverse it.”

She makes it sound like she went to the bar to order a Pinot Grigio, but the bottle was dry so they gave her a Coors. She might as well have just said, “Fuck it, I’ll deal with it somehow.”

Like her fellow candidates, Ted Cruz and Ben Carson, Carly Fiorina sounds more like a Fox News contributor who should be speaking to Sean Hannity via satellite against the backdrop image of a still lake rather than giving a State of the Union Address.

Fiorina did shatter a glass ceiling when she became the first female CEO of a Fortune 50 company: Hewlett-Packard. Many conservatives believe an individual with a background in business is exactly what this country needs. The last GOP presidential nominee was even in favor to make it law.

Speaking at a campaign stop in 2012, Mitt Romney recounted to the crowd an exchange with a business owner:

Although Bill Clinton, Barack Obama and Abraham Lincoln would not have qualified for the presidency under such an amendment, Mitt Romney, Donald Trump and Carly Fiorina would. 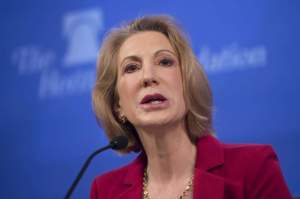 Our last businessman in office was George W. Bush, who ranked among the bottom ten presidents in a 2009 C-Span presidential ranking survey.

Fiorina may want to re-think her strategy… unless she really wants a spot on that Fox & Friends couch.