E-mails!  Wasserman Schultz!  Rigged! No, these aren’t safety words in a Conservative bondage club.  These are the headlines and opinions in the media on the first day of the Democratic National Convention… and judging from the social media posts, they are in desperate need of context. 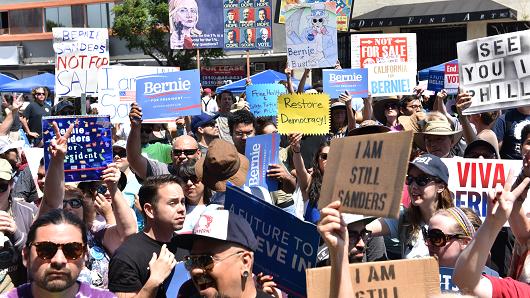 Last week, it was revealed the DNC had been hacked by two separate cyber groups.  Cybersecurity firm CrowdStrike has linked both groups to Russian military-intelligence.

Of the thousands of e-mails released, only a handful feature what could be referred to as disparaging remarks of candidate Bernie Sanders.  Contrary to what your friend with the Sanders tattoo posts, the e-mails currently circulating are not evidence of a rigged election.

Wyoming Delegate and Sanders supporter Jessica Chambers recently spoke with The New York Times on the convention floor. She explained she had not read the e-mails, but was upset with “more like [the] attitude” found within.

The most notable of the e-mails (from CFO Brad Marshall), discusses the possibility of having someone publicly ask Sanders about his religious affiliation in an effort to potentially dissuade Southern Baptists from supporting the Vermont Senator.

It’s the worst e-mail of the bunch.  It’s disgusting and has no place in this political party… and there is also no record it was ever enacted.

There is no evidence in any of these e-mails indicating Clinton won a state due to illegal tactics.  Sanders still lost the primary because he lost the minority vote.

In the wake of the e-mails, DNC chair Debbie Wasserman Schultz has resigned.

Sanders supporters were quick to let out their inner Hulk when they learned Wasserman Schultz was getting a promotion within the Clinton campaign after resigning.  Of course, this is also misinformation.

Wasserman Schultz was made an “honorary chair” to the Clinton campaign’s 50 state program.  Anybody threatening to withhold their vote over this needs to seriously look up the definition of “honorary” right now.