“The Republican nominee is unfit to serve as president,” President Obama told the press during a White House news conference last week. “He keeps on proving it.”

GOP presidential candidate Donald Trump continued to attack a Gold Star family, insinuated the general election may be rigged, advised Americans against keeping their 401(k) funds in the stock market and the solution he gave to victims of workplace sexual harassment was “find another career.”

This was only Tuesday. 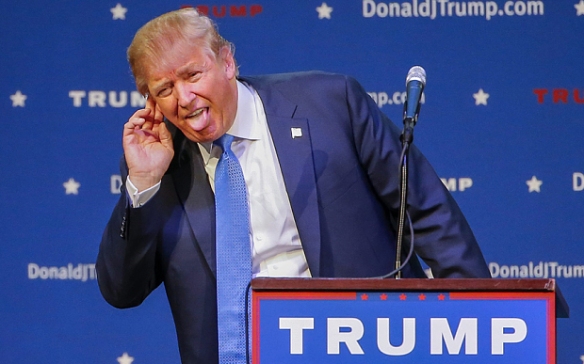 “I don’t regret anything,” Trump told WJLA-TV on his ongoing dispute with the parents of Capt. Humayun Khan, an American Muslim soldier killed in Baquba, Iraq in 2004.

With his wife by his side, the elder Khan held up a pocket copy of the U.S. Constitution as he directly addressed Trump regarding his policy proposal of banning Muslims from entering the United States:

“Let me ask you: have you even read the United States Constitution? I will gladly lend you my copy. In this document, look for the words ‘liberty’ and ‘equal protection of law.’”

Khizr Khan and his family originally immigrated to the U.S. from Pakistan in 1980.

Sounding more like he was auditioning for a Billy Zabka role than as a candidate for the leader of the free world, Trump responded to the DNC speech by attacking Khan’s wife, Ghazala:

“If you look at his wife, she was standing there. She had nothing to day. She probably…maybe she wasn’t allowed to have anything to say. You tell me.”

Criticizing a grieving mother and a thinly veiled attack on her religion? Trump certainly knows how to multi-task.

Responding in an op-ed for The Washington Post, Ghazala explained that although she was offered the same opportunity to speak as her husband, it is still too hard for her to do so with her son’s image in the same room:

“I cannot walk into a room with pictures of Humayun. For all these years, I haven’t been able to clean the closet where his things are – I had to ask my daughter-in-law to do it. Walking onto the convention stage, with a huge picture of my son behind me, I could hardly control myself.”

On the same day Trump declared he had no regrets attacking a Gold Star family, his spokeswoman re-wrote history when discussing the 2004 death of Capt. Khan:

“It was under Barack Obama and Hillary Clinton that changed the rules of engagement that probably cost his life,” Trump spokeswoman Katrina Person told CNN’s Wolf Blitzer.

Capt. Khan was killed defending his men from a suicide bomber five years prior to Barack Obama becoming president and naming Hillary Clinton as Secretary of State.

Capt. Humayun Khan was posthumously awarded the Purple Heart for his brave actions.

Guess who else has a Purple Heart?

“You know something very nice just happened to me. A man came up to me and he handed me his Purple Heart,” Trump told his supporters at a Virginia rally on Tuesday.

Does it get any more humble than that?

Trump responds to the Purple Heart as if it were a much sought after baseball card. Looks like somebody doesn’t have to buy multiple Topps packs in the Target checkout lane anymore.

Illinois Rep. Tammy Duckworth was quick to respond to Trump’s comments in a tweet: 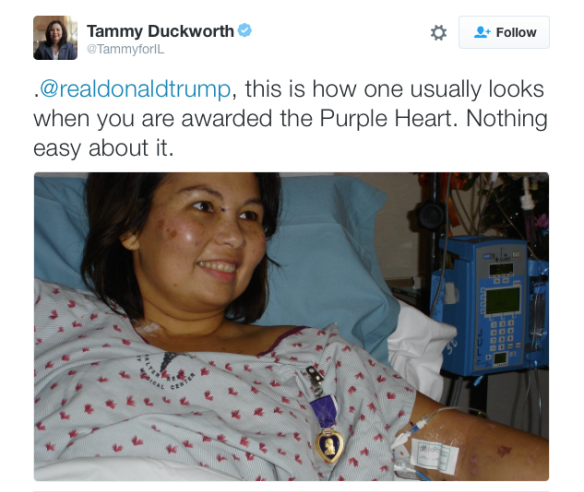 Rep. Duckworth is a double-amputee due to injuries she received in the Iraq war.

NBC’s Katy Tur later reported the Purple Heart given to Trump was actually a copy.

“Several months ago, a foreign policy expert on [the] international level went to advise Donald Trump, and three times he asked about the use of nuclear weapons. Three times he asked, at one point, if we have them, why can’t we use them?”

How are you feeling, Bernie or Busters?

Although the Trump campaign has denied the conversation took place, it does echo back to a March town hall when Trump asked host Chris Matthews: “Somebody hits us within ISIS, you wouldn’t fight back with a nuke?”

When Matthews explained to Trump that it concerns other countries when they hear a U.S. presidential candidate discuss such a willingness to use nuclear weapons, Trump responded:

“Then why are we making them? Why do we make them?”

During multiple public appearances, Trump even claimed he saw professionally shot footage of the money being removed from the plane:

“I look, and I’ll never forget the scene this morning. And remember this: Iran — I don’t think you’ve heard this anywhere, but here — Iran provided all of that footage, the tape, of taking that money off that airplane, right? $400 million in cash.”

To quote VP Joe Biden: “That’s a bunch of malarkey!” 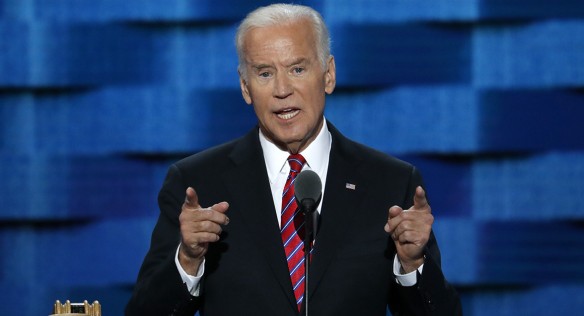 Trump never saw video of the money transfer and eventually admitted days later in a tweet the plane he saw was the one carrying the freed hostages… which did not have $400 million in cash on it.

The $400 million wasn’t for a ransom either… it was money owed to Iran.

In 1979, the Iranian government paid $400 million to the U.S. for military equipment. Although they paid, the country never received the equipment because the U.S. backed-shah government was overthrown.

In 1981, the U.S. and Iran set up an international tribunal at The Hague in the Netherlands, which would hear the claims between the two countries. The equipment claim was finally settled earlier this year with the U.S. agreeing to pay back the $400 million.

THAT is where the $400 million comes from. It has nothing to do with the Iran nuclear deal or the release of American prisoners.

The settlement was actually announced months ago in a White House press release on January 17th, 2016. It’s good to see Trump is keeping up with foreign policy.

Since June, there’s been an uptick in think pieces and social media postings pondering if Trump was self sabotaging his own campaign to get out of the election. I don’t think his ego would allow that.

This past week has been like The West Wing episode “Let Bartlet be Bartlet”… if Bartlet were a sociopath.

Why were things so bad last week?

CNBC’s John Harwood reported on Wednesday that an associate of Trump campaign manager Paul Manafort had divulged that Manafort was “mailing it in” and was no longer challenging his candidate at this point in the race.

Manafort must have gotten back on the clock, because by Friday night Trump was literally reading from a sheet of paper a list of endorsements for House Speaker Paul Ryan, Sen. John McCain and Sen. Kelly Ayotte (all three of which Trump refused to endorse during a Washington Post interview on Tuesday).

Every time Trump inserts an ad lib to the audience, I imagine Manafort watching from the side of the stage muttering. “Just read the fucking paper, you orangutan.”

Trump’s pattern of insults, complete disregard for facts, blatant misogyny, bigoted pandering and absurd lies are the exact same characteristics he displayed during the GOP primary.