Last Friday, San Francisco 49ers quarterback Colin Kaepernick remained seated as the national anthem played prior to a game, in protest of the bias against minorities within our criminal justice system.

While conservative pundits and even the GOP presidential candidate suggested Kaepernick should find a new country to call home, the twenty-eight year old’s decision is actually the most American one could make.

Whether you find it disrespectful or are sympathetic, Kaepernick has the freedom in this country to express himself, however he feels appropriate, under the First Amendment.

Speaking to reporters on Sunday, Kaepernick explained his position:

Or if you’re The Blaze’s conservative personality Tomi Lahren, you heard something completely different:

“How dare you sit there and blame white people for the problems of minority communities! After all, aren’t you half white? Didn’t two white parents adopt you after yours weren’t willing to raise you?”

Lahren is fly fishing with race-bait(ing).

At no point in Lahren’s three minute and twenty-eight second response does she even mention the bias in the criminal justice system which Kaepernick is actually protesting.

In a truly bizarro move only Donald Trump could understand, Lahren implies Kaepernick is a racist before demanding the quarterback show “a little respect” to the men and women serving in our armed forces… which he literally said on Sunday:

Lahren is responding to what she wants to hear from Kaepernick… not what he has actually said. There lies the disconnect.

Kaepernick’s protest comes in the wake of the Department of Justice’s report concluding a racial bias within the Baltimore Police Department.

For being such patriots, you would think Kaepernick’s critics would be more concerned with the actual Constitutional violations that occurred in Baltimore.

However, the most disappointing response came from the San Francisco Police Officers Association.

In a letter to NFL commissioner Roger Goodell, SFPOA president Martin Halloran lashed out against Kaepernick, claiming he “has embarrassed himself, the 49er organization, and the NFL.”

Rather than invite Kaepernick to an open discussion, Halloran suggests he “partake” in the simulators that recruits use to give the athlete an idea of what officers experience on the street. Unfortunately, there is no outreach on Halloran’s part to understand Kaepernick’s point of view… but something tells me Halloran has an idea of what it looks like.

A report released in July by a three judge panel found an “institutionalized bias” within the San Francisco Police Department, specifically against black and Hispanic citizens.

The panel was established after it was discovered that 14 San Francisco officers had “exchanged numerous racist and homophobic text messages.”

“The Police Officer’s Association leadership sets the tone for the police department and historically it’s been an ugly one.”

This was a chance for Halloran to reach out not just to Kaepernick, but to the communities of color and simply say “let’s talk” and he blew it.

Kaepernick is far from the first athlete to protest during a sporting event. As “The Star-Spangled Banner” played during the medal ceremony of the 1968 Summer Olympics, African American athletes Tommie Smith and John Carlos famously raised their fists to the sky. 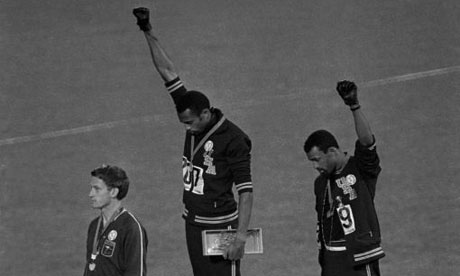 “We were just human beings who saw a need to bring attention to the inequality in our country,” Smith said in an HBO documentary on the Olympic games.

The Chicago Tribune referred to the act as “an embarrassment visited upon the country.”

Suggesting Kaepatrick leave the country goes against everything that makes the United States an incredible nation people strive to be a part of.