“We have to pass the bill so that you can find out what is in it,” former House Speaker Nancy Pelosi explained Obamacare to the National Association of Counties’ 2010 legislative conference. It’s a line often quoted by conservative pundits attacking President Obama’s landmark health care legislation. It’s also one of the most misinterpreted quotes in modern politics.

Pelosi’s full quote actually advocates for reading the bill “away from the fog of the controversy” surrounding it. Fast forward to last Thursday, when multiple Republican Representatives who voted for the GOP’s American Health Care Act admitted that they hadn’t read it before voting. 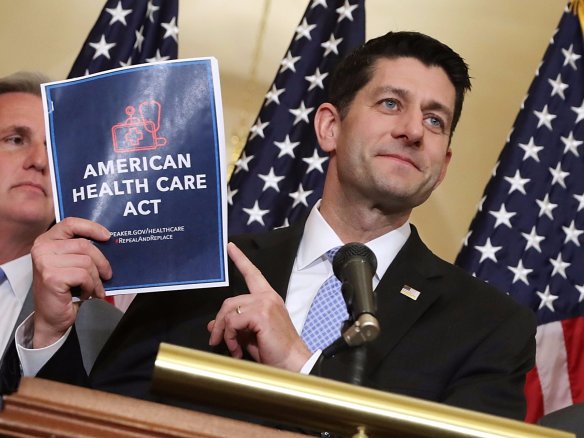 “I don’t think we should pass bills that we haven’t read, that we don’t know what they cost,” current House Speaker Paul Ryan told MSNBC in 2009. Yet they did exactly that.

Without a current CBO score, the House passed the newest version of the GOP health care plan.

With a new amendment adding $8 billion over five years to high-risk pools run by the states, the GOP finally had the support to pass the AHCA.

If you’re wondering why a state would need to fund a high-risk pool, it’s because the new legislation allows states to opt out of the Obamacare provision which prohibits insurers from charging people with pre-existing conditions higher prices.

High-risk pools are not just a step backward from the progress made by Obamacare; they’re a whole flight of stairs that only go down.

I previously wrote about cancer survivor Fiona O’Connell’s experience with her state’s high-risk pool in 2015. Prior to the Affordable Care Act, O’Connell paid $1,200 a month in Illinois’ state pool. Once she enrolled in Obamacare, O’Connell’s monthly payments dropped to $332.95.

Wisconsin Governor Scott Walker has already expressed interest in having the cheese state take a dip in the high-risk pool. Wisconsin has a population of over 5 million.

Prior to the ACA becoming law, the Kaiser Family Foundation compiled a list of pre-existing conditions for which insurers could deny individuals coverage. With conditions like alcohol abuse, arthritis, cancer, diabetes and pregnancy on the list, expect the pool to fill up fast.

Rape or domestic violence are not specified in the current GOP bill. However, if you suffer from a sexually transmitted infection requiring medication, and/or have seen a mental health specialist due to a sexual assault, insurers are allowed to interpret this as a pre-existing condition.

Under the AHCA, you can’t be dropped for a pre-existing condition… but you can be charged a hell of an increase.

Throughout the campaign, Trump claimed he would not cut Medicaid. The AHCA cuts Medicaid funding by $880 billion… that’s more than the next four Avatar movies.

This provision isn’t new and was included in the previous version of the bill.

The March CBO analysis found Medicaid would have 14 million less enrollees by 2026.

If you find yourself in the clear because you aren’t on Medicaid and don’t have a pre-existing condition, you more than likely have employer-based coverage. Don’t get too excited.

Obamacare previously prohibited insurers from issuing caps on benefits employees receive through their employer plans. The AHCA removes that protection.

Did Dr. Giggles write this shit?

A 2015 Kaiser Family Foundation study found 49% of Americans get their coverage through their employer.

“So what we have is something very, very incredibly well-crafted,” President Trump said of the AHCA, in a Rose Garden circle jerk moments after Thursday’s successful House vote. He’s right.

The GOP plan isn’t a mess. It’s very specific in its goal to cut taxes for the wealthy. As previously discussed, the plan increases heath care costs for the lowest income earning Americans. While those making under $10,000 a year struggle to make ends meet for medical care, the top 0.1% will receive an additional $165,090 a year.

On Sunday, Speaker Paul Ryan defended the bill as the GOP “keeping our word” to replace Obamacare.

“People expect their elected leaders, if they run and campaign on doing something, they expect them to do that. And that’s what we’re doing,” Ryan told This Week’s George Stephanopoulos.

Except it breaks a campaign promise by Donald Trump to not cut Medicaid.

The bill still has to pass the Senate, which didn’t prevent GOP representatives from throwing a kegger celebrating passing a bill which was last projected to result in 24 million uninsured Americans.

To avoid a Democratic-led filibuster, Senate Republicans will use the reconciliation process to pass their healthcare bill. Reconciliation limits the Senate GOP to changes affecting the budget. If there’s a bright side to this, not all of the existing provisions in the House bill will meet the requirements for reconciliation.

Even if the AHCA survives a conference committee after passing the Senate, there’s no guarantee the House Freedom Caucus would support a heavily altered bill.

If the bill were to fail again, the best result would be an effort to craft bipartisan legislation to fix Obamacare… not destroy it.

On Sunday night, former President Barack Obama accepted the Profile in Courage award. In addition to reminding the country what a president should sound like, he called on Congress to protect health care for millions of Americans:

“I hope that current members of Congress recall that it actually doesn’t take a lot of courage to aid those who are already powerful, already comfortable, already influential. But it does require some courage to champion the vulnerable and the sick and the infirm – those who often have no access to the corridors of power. I hope they understand that courage means not simply doing what is politically expedient, but doing what they believe deep in their hearts is right.”