I first saw the news on social media of James Comey’s termination as FBI Director on Tuesday afternoon. I thought it was a joke, much like Comey himself did when he learned of the end of his tenure… on television.

Trump’s latest action may be his most devastating yet. The 45th President has undermined the fourth estate, attacked the judicial branch and is now destroying the integrity of the very law enforcement agency investigating him.

The only thing more preposterous than Comey’s firing is the White House’s reasoning behind it. 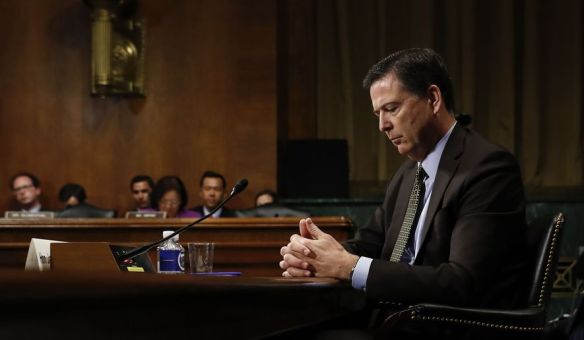 In a letter of recommendation for Comey’s termination, Attorney General Jeff Sessions calls for a “fresh start” in the bureau and a new leader who can ensure “integrity and fairness.”

AG Sessions doesn’t explain why this is needed, but the accompanying memorandum written by Deputy Attorney General Rod Rosenstein does:

“The way the Director handled the conclusion of the email investigation was wrong.”

The improper handling of the Hillary Clinton e-mail investigation.

In the memo, Rosenstein (who’s only been in the position for two weeks) cites Comey’s press conference from July 5, 2016, detailing the investigation as evidence of having usurped the “Attorney General’s authority” and being unfair to Clinton. This wasn’t a specific concern shared by Trump when he recalled the event last week:

FBI Director Comey was the best thing that ever happened to Hillary Clinton in that he gave her a free pass for many bad deeds! The phony…

At a Michigan rally on October 31st, Trump did not sound like someone who believed Comey had made a career-ending mistake:

“I tell you what, what he did, he brought back his reputation. He brought it back. He’s got to hang tough. A lot of people want him to do the wrong thing. What he did was the right thing.”

During Wednesday’s press briefing, White House spokeswoman Sarah Huckabee Sanders would describe Comey’s actions as “atrocities.” Sounds like someone needs to invest in a dictionary.

How many times did President Trump mention the Clinton investigation in his termination letter to Comey? Zero.  Russia?  Oh, boy.

Trump follows up Comey’s firing by writing how much he appreciates the now former FBI Director telling him “on three separate occasions” he was not under investigation.

Multiple associates of Comey have told the Wall Street Journal, these reassurances never took place. “This is literally farcical,” one associate said of Trump’s claim to the Journal.

Wednesday’s thirty-minute press briefing was so full of shit, I thought it was being held in the fertilizer aisle at Home Depot.

“The President had lost confidence in Director Comey and, frankly, he’d been considering letting Director Comey go since the day he was elected,” Huckabee Sanders told the press.

That’s not what Trump sounded like prior to Comey’s termination.

When asked in April by Fox Business Network’s Maria Bartiromo if it were too late to ask Comey to step down, Trump responded:

When Sean Spicer isn’t cosplaying as his favorite Three Amigos character, the Singing Bush, he is the White House press secretary.  Last week, Spicer told reporters, “the President has confidence in the Director.”

Originally reported by The New York Times, Comey requested more resources from Deputy AG Rosenstein for the investigation into possible collusion between Russia and the Trump campaign. Obviously, that’s not a good sign for the Trump administration.

DOJ spokeswoman Sarah Isgur Flores denies the Times story. However, two officials confirmed to The Washington Post  that ranking member of the Senate Intelligence Committee Mark Warner told them Comey said he had made the request.

On Wednesday’s edition of The Lead with Jake Tapper, host Tapper shared the two reasons Comey was fired according to a “source close to former FBI Director Comey:”

By Thursday, Trump’s reason to fire Comey would change like a post-meal chestburster on the Nostromo.

“I was going to fire him regardless of recommendation,” Trump told NBC’s Lester Holt.

During Wednesday’s press conference, ABC News’ Jonathan Karl asked Huckabee Sanders if it were true Trump had already decided to fire James Comey and asked the DOJ to “put together the rationale for that firing?” She responded, “No.”

Trump’s admission with Holt contradicts Tuesday’s White House statement and Vice President Pence, each stating Comey was fired based on the recommendations of the Deputy AG and AG Sessions.

Trump tells Holt he wants a competent, capable director, describing Comey instead as a “showboat” and “grandstander.”

This guy is calling someone else a “showboat:”

Trump continues, stating the “FBI has been in turmoil” under Comey.

Since Comey’s firing, the White House has desperately tried to sell the narrative the bureau’s rank-and-file lost faith in their director.

“…Director Comey enjoyed broad support within the FBI and still does until this day.”

How did Trump handle the day after Comey’s termination? Poorly would be an understatement.

Kislyak should sound familiar. He’s the reason Michael Flynn was fired and why Attorney General Jeff Sessions has recused himself from the Russia investigation.

Angered by the photos going public, a frustrated White House staffer told the media, “They tricked us.”

Schmidt reports Comey met Trump for a private dinner seven days after his inauguration. Schmidt believes the two men only shared one dinner.

In Trump’s interview with Lester Holt, the President claims Comey asked for the dinner in an attempt to protect his position at the FBI.

This dinner would be one of the “three occasions” mentioned in Trump’s termination letter (and heavily disputed by people close to Comey).

According to two people who Comey spoke with about that night, Trump requested the dinner. During which, he asked Comey to pledge his loyalty to him.

I imagine this played out similarly to how Anakin Skywalker pledged allegiance to Emperor Palpatine in Revenge of the Sith.   Except, Comey remained objective and refused to pledge his loyalty.

Although Trump has the legal authority to fire the FBI Director, he also fired the man investigating him. No amount of spin can cover up this was an obscene abuse of power by the most powerful man in our nation.

Whether it’s the press or the FBI, Trump’s consistent attacks against our nation’s institutions serves one purpose: to delegitimize them.

This is what authoritarian leaders do.

Every American should be concerned by the action taken Tuesday night.

1 thought on “The Ugly Truth”