When speaking with MSNBC’s Andrea Mitchell, journalist and gun owner Tom Brokaw agreed with retired Army Gen. Stan McChrystal that “assault weapons do not belong in a civil society.” Brokaw added: “The response to that was, ‘I have to keep my weapon because the government is going to come and try to take it away from me and I have to be able to fight back when that happens.’ That’s the most far-reaching thing you can possibly imagine.”

It’s easy to see why gun owners like Brokaw are overshadowed in the national debate when you have such circus acts as Alex Jones and James Yeager taking center stage.

Not only have gun advocates like Tactical Response CEO James Yeager turned the national discussion on gun control into a sideshow, they have become the strongest voices FOR gun control yet.

“I’m not letting anybody take my guns.” If Mr. Yeager took the time to actually read any of the legislation over which he feels is worth taking innocent lives, he would discover there is not a retroactive provision in any of the proposals. Meaning nobody is coming for your guns.

Conservative news sources such as (you guessed it) Fox News perpetrate this belief that the same administration that extended gun rights during its first term would seek to somehow alter or abolish the Second Amendment. 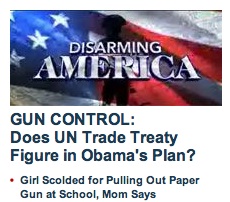 Leave it to Fox News to create a false controversy with the U.N. treaty under the heading “Disarming America.”

The Arms Trade Treaty seeks to regulate international trade of firearms and prohibit illegal activity. It has nothing to do with our nation’s Constitution or a citizen’s right to bear arms.

I recently came across this petition making the rounds on Facebook to block President Obama from signing the treaty, claiming it will “take away our second amendment [sic] right.” Last time I checked, it had over 541,000 signatures.

The United States has specific guidelines pertaining to signing such a treaty that anybody (even Fox News) can access on the official government site, the first being that “The Second Amendment to the Constitution must be upheld.”

Even the hiring of “school resource officers” seems to be something the NRA can get behind, considering their previously offered solution.

“Attacking firearms and ignoring children is not a solution to the crisis we face as a nation.” I guess not. The NRA continued in their statement: “Only honest, law-abiding gun owners will be affected and our children will remain vulnerable to the inevitability of more tragedy.” I have to read the version of the executive actions the NRA received.

Florida GOP Senator Marco Rubio also attacked the President’s actions, specifically his support of the proposed assault weapons ban: “I think it’s completely misplaced. Because here’s the issue in this public policy debate that’s different from others: There is a constitutional right to bear arms.” Rubio continued: “If they want to change the Constitution, if they want to believe the Second Amendment should not be in there or if they believe it should be rewritten in the 21st century then let them have the guts to stand up and propose that.” Oh Marco, you drama queen.

The proposed assault weapons ban does not include any provision to rewrite the Second Amendment. This is simply fear mongering, perpetrated by the modern-day Republican Party, which always triggers an increase in sales for the gun industry. Rubio must be paying it forward, considering he accepted $4,950 from the NRA during his 2010 Senate run.

The other thing Rubio is unaware of is that an assault weapons ban is perfectly constitutional.

The Supreme Court has a history of ruling that not all weapons are protected under the Second Amendment. This includes short-barreled shotguns, such as was the ruling in 1939’s United States v. Miller in which Justice James Clark McReynolds wrote: “we cannot say that the Second Amendment guarantees the right to keep and bear such an instrument.”

In 2008’s District of Columbia v. Heller (which determined that the Second Amendment extends to an individual’s right to own a firearm), Justice Scalia (a constitutional originalist), cited the Miller case in the Heller decision in his explanation that restrictions on specific weapons is constitutional: “We therefore read Miller to say only that the Second Amendment does not protect those weapons not typically possessed by law-abiding citizens for lawful purposes, such as short-barreled shotguns.”

How many cases did the Supreme Court hear regarding the constitutionality of the original 1994 assault weapons ban? ZERO.

Like the hijacking of the Republican Party by the Tea Party, serious gun owners have seen their own platform taken over by an extreme force that seems to have no understanding of current legislation or history.

Gun Appreciation Day founder Larry Ward suggested during an interview with CNN that slavery may not have occurred if all Americans had access to firearms: “I think Martin Luther King Jr. would agree with me if he were alive today that if African Americans had been given the right to keep and bear arms from day one of the country’s founding, perhaps slavery might not have been a chapter in our history.” Ward is seemingly unaware Dr. King was a believer in non-violent resistance.

There is no conspiracy to abolish the Second Amendment or disarm citizens. Not a single piece of legislation will “take our guns” or prohibit a law-abiding individual from purchasing a firearm. Just ask anybody from 1994-2004, when the original assault weapons ban was in place.

However, there is a disgusting, greed-fueled drive to increase sales of ammunition and firearms through fear of the government forcibly removing your guns, whether it is through misrepresenting legislation from the President’s administration or claiming the Sandy Hook school shooting is a hoax.

The F.B.I. reported 16.8 million background checks for 2012, the highest number on record.

According to Fox News, the NRA saw an increase of 8,000 new memberships per day after the Sandy Hook tragedy.

Extreme gun owners are stockpiling weapons, fantasizing of a future tyrannical America, encouraged by gun lobbyists and politicians that is simply not coming.

While doing so, a mentally ill man was able to legally purchase an assault rifle with 6,000 rounds of ammunition and walk into a Colorado movie theatre killing 12 people in addition to injuring 58 others – making it the largest mass shooting in American history.

To quote Samuel L. Jackson: “Wake the fuck up.”

2 thoughts on “The Crazies”