I like to think this is how Tuesday night’s election results were revealed to Virginia Congressman Eric Cantor.

How shocking is Cantor’s loss? He is the first sitting House Majority Leader to lose a primary since the creation of the title in 1899.   You’re in the record books now, buddy. 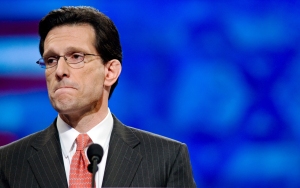 Cantor lost to economics professor David Brat, who happens to have the same level of political experience as a Tauntaun.

Brat served on the Joint Advisory Board of Economists under Governor Tim Kaine, but the board did not write nor influence policy.

Where does Brat stand on the issues? Right on top of them… literally, his boot is on their throat.

Brat supports the full defunding of the Affordable Care Act in favor of a “free-market” solution. 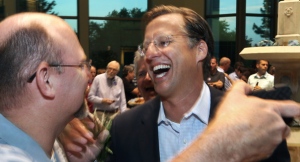 “We need to also scrap employer-based health insurance and give those incentives to individuals to carry their own portable health insurance.” Brat told the Star Exponent. “If we did that, the issue of pre-existing conditions largely goes away.”

I had to drink something just to spit it out while reading that last quote.

Brat is essentially referring to the voucher system. This may sound familiar because it was a component to Paul Ryan’s budget plan, “The Path to Prosperity.”

I wrote about the Ryan plan in a 2012 entry, Saving Private Paul Ryan. I feel it is worth repeating the words of former Reagan advisor Bruce Bartlett here in response to such a system:

“Ryan just assumes that private health insurers would create policies that would provide equal benefits to what Medicare now provides, and does nothing whatsoever to ensure that such an option will exist when the existing Medicare program ceases to exist. Ironically, Obama’s Affordable Care Act, which Ryan wants to repeal, actually creates a mechanism that would facilitate Ryan’s Medicare proposal.”

Brat doesn’t seem to recall the concepts of price gouging or being refused coverage due to a pre-existing condition prior to the ACA.   Somebody needs to ask Brat what it’s like to have Wolverine’s healing ability.

Like millions of Americans, I could not afford health coverage prior to the Affordable Care Act. I have now been covered since the beginning of the year.

Attempting to repeal “Obamacare” is not the only Republican mistake Brat is determined to repeat.

The Randolph-Macon College professor has pledged to not raise the debt ceiling for five years.  Perhaps Brat’s knowledge lies in reciting the names of the Transformers backwards, rather than economics.

Brat must think Black Monday 2011 is a slasher film and not a reference to when the stock market crashed on August 8, 2011 – which happened in response to our nation’s downgraded credit rating on the previous Friday. All of which was a result of simply playing a game of chicken with the debt ceiling in 2011.

Former President Ronald Reagan still holds the highest number of debt ceiling increases (18), a factoid not mentioned along this image that appears on Brat’s official page.

Brat also makes it clear on his website that he will not support any “limit” to our current gun laws. However, even Reagan supported the Clinton era assault weapons ban.

Brat’s trend of being out of sync with the majority of Americans continues with the subject of immigration reform.

“I reject any proposal that grants amnesty and undermines the fundamental rule of law. Adding millions of workers to the labor market will force wages to fall and jobs to be lost.” Brat explains on his official site.

As for Brat’s claim of falling wages, I discussed this in March. In my entry Mixed Nuts, the CBO analysis of the Gang of Eight’s immigration reform bill would actually increase wages in the long term.

The Virginian professor used the subject of immigration against Cantor during their race, citing Cantor’s support of select provisions of the DREAM Act.

“One of the great founding principles of our country was that children would not be punished for the mistakes of their parents,” Cantor said last year in what can only be described as a rare moment of clarity for the House Majority leader.

Old man Brat referred to Cantor’s statement as “one of the most radical pro-amnesty statements ever delivered by a sitting representative.” David Brat: Bringing compassion back to the GOP, one deported child at a time.

A 2012 study concluded that if the DREAM Act were to pass, it would add $329 billion and 1.4 million jobs to the economy by 2030. I retract my Tauntaun comment from earlier, because even a Tauntaun has better economic sense than David Brat.

Many have speculated this may be a resurgence of Tea Party values, but the same story did not play out in South Carolina as Sen. Lindsay Graham (a member of the Gang of Eight) claimed victory in his primary race. Graham swept the leg on six Tea Party challengers.

Political pundit Ezra Klein wrote an excellent piece for Vox, breaking down the number of votes in Cantor’s race. The former Washington Post “Wonkblog” writer explains that “less than three-hundredths of 1 percent of the people who voted in the 2012 House elections” voted against Cantor.

I disagree with those that believe Washington or the system is broken. The Tea Party-infused GOP and non-compromising politicians like Eric Cantor are the wrench in the wheel of progress.

While I welcome the departure of Cantor, replacing him with an even crazier caricature is not a solution. However, I don’t see an easy path for David Brat to Washington.

Brat will still face a Democratic challenger in November, and with only 19% of Virginians supporting deportation, his stance on immigration may hurt more than help with general voters.

Tuesday’s election should be a hopeful reminder to all Americans. This is the year WE can make change.