This November, all eyes will be focused on the Senate. The Republicans only need to win six seats to take control from the Democratic majority, one of which happens to be in my beautiful home state of Iowa. Unfortunately, the Iowa race also features one of the nation’s most insane candidates: Republican Joni Ernst. 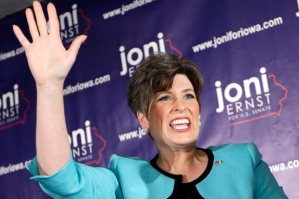 However, that is about where her ties to the GOP establishment end. Ernst is your average extreme Tea Party candidate, carrying the proud seal of approval from Sarah Palin.

“Iowa – come together and send this Midwest Mama Grizzly roaring to Washington on her Harley so she can join with the good guys to get our country back on track!” The (almost) one-term Alaskan Governor posted on her Facebook page.

When Ernst isn’t “roaring to Washington,” she drives her Harley to a shooting range; taking practice shots against the Affordable Care Act.

Earlier this year, Ernst proudly displayed her lack of understanding for the ACA when she posted a statement on her official site on the law’s fourth anniversary.

“Instead of individuals being able to keep the insurance policies they liked, as was promised by Washington Democrats, millions have faced cancellation; instead of strengthening Medicare, the Administration is cutting funding on seniors.”

The non-partisan factcheck.org did an excellent piece analyzing the current data to determine how many people did lose their insurance due to the ACA. That number is 2.6 million.

Of course do not expect Ernst to explain that many of those patients of dropped plans could find a more affordable alternative with superior coverage on the ACA plan exchanges, as discussed in my previous piece A Simple Plan.

The only insurance Ernst will offer voters is that they don’t hear of the health insurance gains due to the Affordable Care Act. No worries, the Factcheck piece has you covered:

“The estimate of 9.3 million newly insured has a margin of error of 3.5 million people, meaning researchers have a high degree of confidence that the true number would be between 5.8 million and 12.8 million.”

The above number of newly insured does not include young adults that gained health insurance through a new provision under the ACA that allows children to stay on their parent’s policy until the age of 26. If we take that number (estimated to be 3 million) and add it to the lowest possible number of newly insured, we are at nearly 9 million people.

This is what Ernst is shooting at.

Ernst’s claim that the current administration cut Medicare for seniors has been debunked numerous times, most famously by former President Bill Clinton during the 2012 Democratic convention.

$716 billion dollars was cut in subsidies to providers, not patients. That money was put back into Medicare to close the Part D donut hole and extend the life of the Medicare program.

Predictably, Ernst supports the full repeal of “Obamacare.” Without a successful repeal after 50 plus attempts within Congress, Ernst would support legislation that simply arrested federal officials enforcing the law.

The Hog Castrator would also support the abolishment of multiple government agencies, including the Environmental Protection Agency and the Internal Revenue Service. The latter, Ernst would like to see replaced by a Fair Tax.

A Fair Tax is a federal sales tax on new goods that would replace all federal income taxes. This rate would be in addition to your state’s own sales tax rate.

During the 2008 elections, Mike Huckabee favored a Fair Tax approach to reform. Huckabee’s rate was at 23%.

However, President George W. Bush’s Advisory Panel of Federal Tax Reform analyzed this method and found the rate would have to be 34% at minimum with the potential to increase.

“Replacing the current income tax with a stand-alone retail sales tax would increase the tax burden on the lower 80 percent of American families, as ranked by cash income, by approximately $250 billion per year. Such families would pay 34.9 percent of all federal retail sales taxes, more than double the 15.8 percent of federal income taxes they pay today. The top 20 percent of American taxpayers would see their tax burden fall by approximately $250 billion per year.”

The panel estimated a single mother of one child making $20,000 a year would see “a tax increase of over 750 percent” under a Fair Tax. A married couple under the same plan with two children making $300,000 would see a 19 percent tax cut.

Advocates of a Fair Tax would counter this concern with the Prebate: a government refund check mailed to citizens, refunding sales taxes they have paid on basic needs.

The panel findings declared a Prebate program would “cost more than all budgeted spending in 2006 on the Departments of Agriculture, Commerce, Defense, Education, Energy, Homeland Security, Housing and Urban Development, and Interior combined.”

Even with a Prebate, the situation is not good for the middle class:

“A typical married couple at the bottom 25th percentile of the income distribution earns $39,300 per year and would pay $5,625 dollars in federal taxes in 2006. Under the retail sales tax with a Prebate, the same family would pay $7,997 in net federal taxes after subtracting the Prebate of $6,694, resulting in a tax increase of $2,372, or 42 percent.” Great idea, Joni.

When big oil’s Koch brothers have donated $12,800 to her campaign, nobody should be surprised that Ernst wants to shut down the EPA. 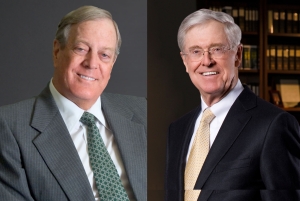 Des Moines residents may recall last year the Raccoon and Des Moines rivers were found to have record levels of nitrate due to contamination from hog farm runoff. Unfortunately, the two rivers are also a large source of tap water.

It was the EPA that stepped in and ordered the city to remove the nitrate.

So, if you prefer a mixture of fertilizer and pig shit with your drinking water, vote Ernst.

Speaking of the environment, Ernst stands firm on her uncertainty when it comes to climate change: “I don’t know the science behind climate change. I can’t say one way or another what is the direct impact, whether it’s man-made or not.”

This is an issue we can no longer afford to have doubts or hesitation on. As written in a previous post After Earth, the current International Panel on Climate Change assessment shows that 95% of participating scientists agree that human emissions contribute to climate change. That number is up 5% from the 2007 report.

When big oil funds your campaign, it literally pays to play dumb.

I was incredibly proud when Iowa became the third state in the nation to legalize same-sex marriage; Ernst, not so much. Last year, Ernst was one of eighteen Republicans who sponsored an amendment to the state constitution to ban same-sex marriage. The majority of Iowans opposed such an amendment, which was blocked like a boss by Senate Majority Leader Mike Gronstal. 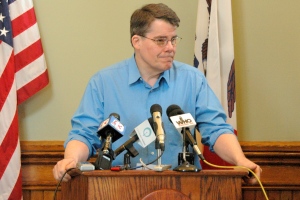 While discussing how to prevent our nation’s current state of seemingly regular mass shootings during a May Q&A, Ernst implied that the shooters of such tragedies acquired their weapons illegally. “When we enact gun laws it is law-abiding citizens who abide by those laws. It is not people who will subvert the system and get firearms illegally.”

The interviewer specifically mentioned movie theaters in his questioning, referencing the 2012 Aurora, Colorado shooting. 12 people were killed and 70 were wounded. The shooter, James Holmes purchased all of his weapons legally.

As mentioned in my previous post, Stop! Or My Mom Will Shoot, a large number of the guns used in Chicago’s crimes are legally purchased outside of the city.

Ernst’s solution to our nation’s firearm murders is to focus solely on mental health accessibility: “We just need to offer support to those people who have mental health issues and make sure they’re receiving the help they need.”

This year, 62 million more Americans are gaining coverage under the Mental Health Parity and Addiction Equity Act. That expansion is only occurring under Obamacare, of which Ernst supports the “immediate repeal.” To quote another Tea Party-loved Republican, “oops.”

One issue Ernst is distancing herself from is that of personhood. During her September debate with Democratic nominee, Bruce Braley, she claimed her support of a personhood amendment was “simply a statement I support life.”

As discussed in my entry, Groundhog Day, personhood gives a zygote the same rights that you and I currently have. If passed, a personhood amendment would be a game changer for women.

Ernst is of the belief that conception begins at fertilization, which goes against actual science.

“The medical community has really been quite clear about when pregnancy begins,” Obstetrician/Gynecologist Dan Grossman told NPR’s Julie Rovner, “and that definition is that pregnancy begins once implantation occurs.”

The scariest thing about Joni Ernst is that she is currently leading in every poll. The Des Moines Register currently has Ernst with a 6-point lead over Braley.

There is no doubt Ernst will fight for the great people of Iowa. She will fight for setting women back 41 years, dirty air and water, ending coverage for pre-existing conditions and increased taxation on the middle class.

The people of Iowa deserve better.