My beautiful home state of Iowa has an incredible history of supporting and paving the way for equality. Iowa was third to recognize interracial marriage, home to the first state university to offer degrees to men and women equally, second state to prohibit segregated schools, first state to elect a woman (Julia C. Addington) to public office, first state to have a female attorney (Arabella Mansfield), site of the oldest mosque in the United States (Cedar Rapids, holla!), third state to legalize same-sex marriage and home to the nation’s first state university LGBT organization (Iowa City, holla!).

And Donald Trump, whom the New York Times recently described as “the worst nominee put forward by a major party in modern American history,” is currently projected to win it in November.

FiveThirtyEight’s Harry Enten recently published a piece analyzing the ‘must-win’ states for the candidates. Enten refers to Iowa specifically as a “nearly ‘must-win’ state” for Trump.

Referring to the polls-only forecast numbers, Enten projects if Trump were to lose the Hawkeye state his chances of winning the presidential election fall to 5%. However, an Iowa win gives the real estate mogul a 61% chance of becoming the nation’s first president who has bragged to Tucker Carlson about how much “pussy” he gets.

Neither Johnson nor Stein will win this election. They won’t even qualify for the debate stage (the two campaigns have already failed to do so for Monday night’s first presidential debate and October 4th’s VP debate).

While Stein literally loses in polls to a dead gorilla, neither third party candidate is dropping out anytime soon and it has nothing to do with winning.  It’s all about the Benjamins.

If either of the third party candidates receive 5% of the national popular vote, they become eligible for federal funding on their 2020 campaigns. FiveThirtyEight currently projects Johnson to earn 7.3% of the popular vote. Neither Stein nor Harambe currently register a full percentage point. 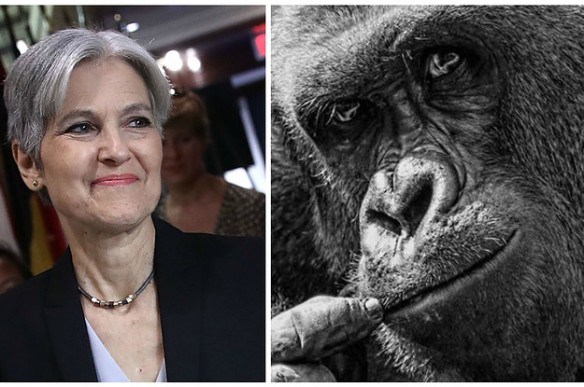 A third party vote enables a Trump win… and Jill Stein would prefer that to a Clinton presidency.

“Donald Trump, I think, will have a lot of trouble moving things through Congress,” Stein told the Politico podcast. “Hillary Clinton, on the other hand, won’t.. Hillary has the potential to do a whole lot more damage, get us into more wars, faster to pass her fracking disastrous climate program, much more easily than Donald Trump could do his.”

Trump isn’t the only one that needs to grab a juice box and watch a “Schoolhouse Rocks!” marathon.

If Trump wins, the GOP will maintain their control over Congress; making passing his policy proposals as easy as going down a Slip’n Slide.

Although Jill Stein may struggle with the ramifications of a Trump victory, House Speaker Paul Ryan doesn’t:

“So, next year, if we’re sending this bill to a Republican president, it will get signed into law. Obamacare will be gone.”

That’s how quick things will change under a Trump presidency.

Trump has built his very short political career on racism, homophobia, Islamaphobia and all-around hate. The real estate billionaire placed another brick in the wall against equality with the announcement of his latest advisor, Rick Santorum.

Stein’s claim that Clinton will initiate more wars than Trump is nothing more than hyperbole. She must have missed Trump’s comments earlier this month when he threatened Iranian ships which make improper gestures to American crew in international waters will be “shot out of the water.” There’s nothing like starting a war over someone flipping you the bird.

I can only imagine the reaction of a Trump administration if Iranian President Hassan Rouhani tweeted something like, “Trump wine tastes like piss warm PBR.”

In addition to international conflict, a protest vote by progressives destroys their own domestic agenda as well.

The next president could nominate up to four Supreme Court justices (including the current vacancy left by Antonin Scalia). You are going to get one shot at insuring a liberal slant to the court for a generation, and this is it.

If you simply want to “watch it all burn,” it’s time to end the Nolan-era Batman cosplay and grow up. The message in your tired Anonymous meme will have real world consequences for people that likely don’t look like you.

A Clinton Supreme Court will implement President Obama’s immigration executive action, DAPA, keeping our nation’s immigration families together and in the work force.

A Clinton court will also protect a woman’s right to choose and marriage equality, both rulings Trump has pledged to overturn.

Clinton has a comprehensive criminal justice reform proposal in response to the well-documented racial bias within our justice system. In contrast, Trump’s VP Mike Pence stated last week he no longer wants “institutional racism and institutional bias” to even be a part of the conversation regarding our nation’s policing. The Trump campaign itself has no criminal justice reform plan.

Thanks to Bernie Sanders, the Democratic Party platform is the most progressive in the party’s history; including raising the minimum wage to $15 an hour and a public option for healthcare.

While Clinton and the party platform call for closing the Halliburton loophole on fracking, Trump would lift the regulations currently in place on the tracking industry.

While Clinton supports the international Paris Agreement to fight climate change, Trump has said he would withdraw from the deal. Trump’s stance isn’t surprising when you consider he has previously referred to climate change as a hoax.

A vote is never wasted; someone always benefits. A third party vote benefits Donald Trump and his campaign of bigotry.

You’ve been on the right side of history many times before, Iowa. We need you (and the country) on it this November.