Donald Trump’s questioning of Sen. John McCain’s status as a war hero was the foremost comment to reach the national media from last weekend’s Family Leadership Summit, which is unfortunate. A listen of the other attending GOP presidential candidates’ speeches quickly revealed policies and world views so outdated they should be displayed next to the dilophosaurus pen in Jurassic Park.

Primarily an organization advocating against same-sex marriage, The Family Leader itself has become a fossil after the recent Supreme Court ruling on the civil rights issue.

Born and raised in Iowa, I was incredibly proud when my home state’s Supreme Court ruled in favor of legally recognizing same-sex marriage in 2009: making the Hawkeye State only the third in the nation to do so at that time.

In 2010, The Family Leader’s current President, Bob Vander Plaats successfully led a campaign to unseat three of the Iowa Supreme Court justices who ruled in favor of same-sex marriage during a retention election. 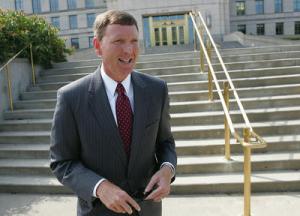 The group would gain further notoriety during the 2012 elections when they requested conservative candidates to sign their atrociously twisted Marriage Vow.

The vow demanded support of a “federal Marriage Amendment to the U.S. Constitution” and claimed the genetics of homosexuality are based on an “anti-scientific bias.”

Moderating the candidate Q&As for the Summit was Republican pollster Frank Luntz. Luntz had previously won Politifact’s 2010 Lie of the Year Award for phrasing President Obama’s Affordable Care Act as a “government takeover” of healthcare. Clearly, he has the right qualifications for this event.

One of the first candidates to take the stage was Texas Senator Ted Cruz.

Predictably, Cruz denounced the recent SCOTUS decision on same-sex marriage, but his most interesting comments were spoken later when he responded to Luntz’s inquiry about regrets.

Cruz recalled his reaction to first hearing of his parent’s divorce while in law school:

“I argued with my parents. I sent my parents scripture after scripture on the sanctity of marriage, I argued this is wrong, you shouldn’t do it. I butted my head. Frankly, I was very judgmental to my parents.”

Of course, divorce is a violation of Cruz’s religious views: the same views he hides behind when supporting discriminating policies against the LGBTQ community.

“I asked God for forgiveness as the pride on my part to judge them.”

According to Luke 16:18, divorce is adultery and committing adultery is breaking one of the Ten Commandments. However, I don’t see Cruz supporting legislation to prohibit divorce.

The doctor was filmed without her knowledge by two actors posing as buyers from a fetal tissue procurement company.

Planned Parenthood quickly released a statement explaining how women have the option to give consent to donate blood and tissues after the abortion procedure for scientific research. Planned Parenthood does not profit off the transactions and the costs involved are for transportation and labor.

One of the most surprising aspects of the latest conservative attack against Planned Parenthood is that they convinced their supporters that human body parts are cheaper than a 6” Star Wars Wampa action figure. Thirty dollars? Come on, guys.

Claiming the women’s reproductive health organization has committed “multiple federal felonies,” Cruz would like to see the Department of Justice investigate and prosecute Planned Parenthood. This would be in addition to Congress holding hearings and cutting off taxpayer funding, which resulted in a standing ovation from the crowd.

Due to the Hyde Amendment, federal Medicaid dollars can not be used for Planned Parenthood’s abortion procedures (which only accounts for 3% of its services).

Cruz isn’t alone in his vow to defund Planned Parenthood; Marco Rubio, Rand Paul, Carly Fiorina and Mike Huckabee have all made statements to defund it. Later in the day, Scott Walker would proudly declare during his appearance he defunded Planned Parenthood in his state of Wisconsin four and a half years ago.

A quick review of Planned Parenthood’s 2013-2014 annual report shows us how many people would be affected if the GOP successfully defunded the organization:

None of the above numbers include abortions.

Moving on to foreign policy, Cruz discussed what he referred to as the “catastrophic” Iran deal. My jaw fell to the floor as I listened to the Senator explain how Iran is “allowed to keep all 19,000 centrifuges” and “keep much of its enriched uranium.”

Bill Clinton once stated that Paul Ryan had “Brass” for the Republican VP candidate’s misleading comments on the ACA’s Medicare savings. Ted Cruz has Transformer balls for this whopper.

The agreed upon Iran deal is essentially the initial framework. Under the deal, Iran’s centrifuges drop from 19,000 to below 6,000 with the ability to enrich uranium. The country’s enriched uranium drops from 10,000 kilograms to 300 kilograms.

Strangely, what Cruz said only happens if we don’t go through with the deal.

Texas Governor Rick Perry also commented on the Iran deal, making it a priority if he were to win the 2016 election, he would “negate this deal with Iran and send the clear message to our allies in the Middle East that America will be there with them day in and day out, and we will do everything we can to stop Iran from getting a nuclear weapon.”

Everything but agree to a diplomatic solution, apparently.

Of course, it wouldn’t be a party without bashing the Obamacare piñata!

In response to a question from the audience if it was still possible to repeal Obamacare, Perry believed it was and added: “It is not the federal government’s responsibility to deliver healthcare in this country.”

Of course, the Texan has a solution to replace the healthcare law:

“I trust these states. We know that we can deliver healthcare more efficiently, more effectively.”

Just like Texas, which has the highest uninsured rate in the country.

A recent study covered in The Dallas Morning News shows that over 1 million Texans are eligible for the expansion and the state would “forfeit $9.6 billion of federal Medicaid matching funds in 2022.”

Perry was eventually asked about his stance on same-sex marriage by a gay audience member.

The Lone Star politician, who was the proud owner of the most homophobic campaign ad during the 2012 presidential election, responded “those decisions should be made at the states.”

Perry added: “The next president of the United States very possibly could pick three Supreme court justices in their term of office,” referring to the recent Supreme Court same-sex marriage ruling.

This is an important point and possibly the most important reason why we should always vote. Same-sex marriage was ruled in favor by only one vote.

To put that in perspective, If John McCain had won the 2008 election, the Supreme Court ruling would almost certainly have been against it.

Not surprisingly, the man’s follow-up question asking what the risk was in allowing equal opportunity to marriage was ignored by Perry and the moderator.

Wisconsin Governor Scott Walker made sure the audience understood he wasn’t singing “It’s Raining Men” when the Supreme Court ruling on same-sex marriage was announced during his appearance:

“I believe we should support a constitutional amendment to allow states to define marriage as whatever they see fit.”

With an average speaking time of twenty-five minutes, Walker spoke on the issue of taxes more than many of the other speakers:

“I think a good start would be to look at what President Reagan did back in 1986 when I was in high school, having two lower marginal rates.”  Walker elaborated, “Lower the rates, broaden the base.”

He added, “We need to lower the burden on job creators.” 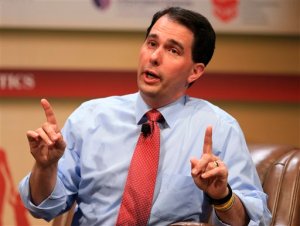 Bar trivia! “Job creators” is the GOP code for the nation’s wealthy, a term originally created by this Summit’s very own moderator, Frank Luntz.

“Up until 1986, the top marginal rate, the top statutory rate was 50 percent. Now it’s 35 percent. And all the pressure is on to lower that even further. And this just doesn’t make a great deal of sense to me. When people say, ‘Oh, we can’t raise taxes on the rich. They’ll go on strike, they’ll move to another country.’ But within recent memory, it hasn’t been that long ago that we had rates that were substantially higher. And these people did just fine.”

Not a single major media outlet reported on the false misrepresentations, poor policies or fact checked the lies told at The Family Leadership Summit. Rather, they focused on a single candidate’s outrageous attacks on a fellow politician’s war history. This tactic isn’t even unique; it’s been used by Republicans before.

“I simply cannot express in words how much I value their willingness to stand up against John Kerry,” Bush wrote to Colonel George Day, a member of the group.

1996 Republican Presidential nominee Bob Dole also joined in the Kerry bashing during an appearance on CNN:

“With three Purple Hearts, he never bled that I know of. And they’re all superficial wounds.”

During the Republican National Convention, some delegates even wore band-aids with a purple heart, making fun of the war hero.

Of course, the Swift Boat Veterans for Truth were eventually discredited.

The Republican candidates did what they do best from The Family Leadership Summit stage: showcased their irrational fear of change and continued embrace of prehistoric policies.

As the day ended, I imagine Chris Pratt had no issues as he wrangled the candidates back into their cages.