Since July, the GOP has been parroting the lie that Planned Parenthood has sold the body parts of aborted babies for profit. Based on debunked undercover videos from anti-abortion group the Center for Medical Progress, the Republican-controlled House even went as far to open an investigation against the healthcare provider (predictably finding no misuse of federal funding).

Now the rhetoric from the right is proving to have truly disastrous consequences.

The gunman has been identified as 57 year-old Robert Dear, who surrendered to officers after a five-hour standoff.

Although no motive has been determined, an unnamed law enforcement official confirmed to The Washington Post that the shooter did mention “no more baby parts” after surrendering to authorities.

The official elaborated that the shooting was “definitely politically motivated.”

Planned Parenthood explained in a July statement that fetal tissue is donated with the consent of the patient for scientific research and any received funds are for reimbursement of potential labor and transportation costs. However, that has not prevented the GOP candidates from using the false narrative to attack the organization relentlessly.

During the first GOP presidential debate in August, former Arkansas Governor Mike Huckabee referred to the non-existing controversy when discussing a personhood Amendment to the Constitution, claiming we need to “change the policy to be pro-life and protect children instead of rip up their body parts and sell them like they’re parts to a Buick.”

During the second debate at the Reagan Library, Texas Senator Ted Cruz (a seemingly compulsive liar) told CNN’s Dana Bash: “I would encourage every American to watch these videos. See senior Planned Parenthood officials callously, heartlessly bartering and selling the body parts of human beings, and then ask, ‘Are these my values?’ These are horrifying.”

During the same debate, former Hewlett Packard CEO Carly Fiorina not only repeated the lie attacking Planned Parenthood, she described watching a Center for Medical Progress video that doesn’t even exist.

Florida Senator Marco Rubio bought a one-way ticket to crazy town when he claimed this situation created an “incentive for people to be pushed into abortions so that those tissues can be harvested and sold for a profit.”

All of the GOP candidates called for a federal defunding of Planned Parenthood based on the lie created in the heavily edited videos.

“We share the concerns of many Americans that the continued attacks against abortion providers and patients, as well as law enforcement officers, is creating a poisonous environment that breeds acts of violence,” Planned Parenthood Rocky Mountains CEO Vicki Cowart said in a statement responding to the Colorado Springs shooting.

“Sorry, David Daleiden. You don’t get to create fake videos and accuse abortion providers of ‘barbaric atrocities against humanity’ one day and act shocked when someone shoots to kill in those same facilities the next.”

“It’s America. You are free to have your speech. The language you choose matters. You are not free from the judgment of the consequences of your hate-filled rhetoric.”

This can also apply to the xenophobic smear campaign by the party’s candidates against Muslims and the Syrian refugees. 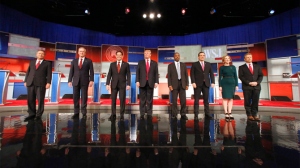 GOP frontrunner Donald Trump recently made headlines when he claimed American Muslims in New Jersey cheered the fall of the World Trade Center towers on 9/11. Although not a single fact checker corroborates Trump’s tale, he continued to double-down on it during an appearance on Sunday’s “Meet the Press”:

“We can’t have people coming in that we know nothing about. There is no paperwork, and for good reason.”

Trump’s fear-mongering statement is one of staggering ignorance, and he’s not alone. Trump’s fellow candidates Ben Carson and Marco Rubio have said similar things in regards to the lack of a vetting process.

If an individual meets the qualifications for refugee status by the United Nations Commission for Refugees they will be referred to a Resettlement Support Center. The following agencies/departments then contribute to the review process of a refugee eligible for U.S. resettlement:

Unless these departments are on Etch A Sketch, there’s paperwork.

This ridiculous rhetoric leads to situations like the one that recently took place in Irving, Texas.

On November 21, a group of armed anti-Muslim protestors identifying themselves as the Bureau on American Islamic Relations (BAIR), stood outside a mosque in opposition to the United States accepting Syrian refugees and “the Islamization of America,” whatever the fuck that means.

If you want another example of white privilege, imagine the reaction if a group of armed Muslims stood outside of a Christian church in Texas.

Just days after the protest, BAIR spokesman David Wright published the names and addresses of Muslims and “Muslim sympathizers” living in the Irving area on social media.

Someone should tell Mr. Wright that one domestic, extreme right-wing terrorist has killed more people this past weekend than the United States’ resettled Syrian refugees have since we began letting them into the states in 2011.  And that number is zero.