Earlier this year, Republican strategist Steve Schmidt referred to the CPAC convention as “the Star Wars bar scene of the conservative movement.” If CPAC is the Star Wars cantina, this weekend’s Values Voter Summit may just be the Death Star.

Launched in 2006, the Values Voter Summit is the creation of the Family Research Council.  The FRC, recognized for lobbying against civil rights for the LGBT community, has been labeled a hate group by the Southern Poverty Law Center.

As mentioned in our previous entry Speed 2: Cruz Control, the FRC has linked homosexuality to pedophilia and claimed the repealing of Don’t Ask, Don’t Tell would lead to sexual assaults against heterosexuals serving in the military.  You can’t make this shit up.

A brief sampling of the presentations offered during the event weekend gives you an idea of what one signs up for when they join this conservative haunted hayride:

The only thing more outlandish may be the Speakers themselves, many of whom are current Washington lawmakers.  Few can illustrate this better than Texas Representative and “terror babies” conspiracy theorist, Louie Gohmert.

This echoes similar attacks by other Tea Party Republicans.  Just last month, Rand Paul accused the President of the United States of asking the American people to “be allies with al-Qaeda.”  In February, Senator Ted Cruz claimed two-time Purple Heart Award recipient Chuck Hagel had spoken to anti-American groups during Hagel’s nomination process for Defense Secretary.  No evidence has been provided by Paul nor Gohmert to back up their claims and Cruz’s source, a batshit crazy right-wing website, has been debunked.

I don’t understand how these individuals can publicly “defend” our war monuments during a government shutdown they caused while simultaneously insinuating that our nation’s war heroes are traitors.

Fox News channel contributor Sandy Rios did what the FRC does best: used her time to attack homosexuals. Her wretched dog fuck of a speech ironically occurred on October 11, which is National Coming Out Day. Rios endorsed the detestable reparative therapy, the process that can allegedly change an individual’s sexual orientation from gay to straight.  “There are tons of ex-gays with fabulous stories,” Rios said.  Of course, Rios fails to mention that the American Psychiatric Association and the American Medical Association oppose such therapies, and find them to actually pose a “serious threat to the health and well-being” of the patient.

Rios goes to on to insinuate that the dangers of HIV and AIDS lies solely within the gay community: “Why would we promote homosexuality so thoroughly and not be able to speak about it in public schools when we know that it actually puts these especially young guys at risk for HIV and all these other diseases, when it shortens their lifespan, why would we do that?  And because we want to stop that, we are the ones who hate?”   It sounds like you need to go back to school… or at least take a sex education course, Sandy.

It is tough to determine when Sandy hit her lowest point, considering there were so many of them, but some may say it was when she referred to the murder of Matthew Shepard as a “fairy tale.”  Shepard, a Wyoming resident, was brutally beaten by two men and left to die, hung on a fence.  It is widely accepted that Shepard was the victim of a hate crime, even though there was no hate crime criminal statute in the state with which to prosecute the murderers at the time.

“It wasn’t true,” Rios stated about the historically documented events surrounding Shepard’s murder.  The conservative radio host bases her entire perspective on a new book that alleges Shepard was killed over a drug deal, not sexual orientation.   However, the author’s case is far from airtight, especially when you consider evidence and testimony from the trial.

The Atlantic’s Alexander Abad-Santos also points out the book’s author Stephen Jimenez is friends with Russell Henderson’s attorney, Tim Newcomb.  Henderson is one of the men convicted for Shepard’s murder.

Rios’ allegation that the Shepard death was embellished by liberal politicians, is a direct attack against the Matthew Shepard and James Byrd Jr. Hate Crimes Prevention Act, signed into law by President Obama in 2009.  The legislation finally made it a hate crime to assault individuals based on sexual orientation and gender identity.  You know the Family Research Council was hitting the bar hard that night.

Neurosurgeon, Former 2013 CPAC speaker and Fox News contributor Dr. Ben Carson had previously equated homosexuality to beastiality, which of course meant he was offered a speaking opportunity at this year’s Values Voter Summit.

“Obamacare is really, I think, the worst thing that has happened in this nation since slavery,” Carson told the audience.  Christ, did the good doctor ever take a history course? 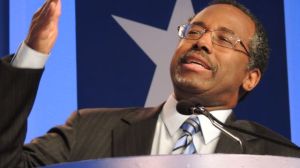 Of course, the last sentence is referring to the individual mandate, which is a conservative concept.

The mandate originated from the conservative think tank The Heritage Foundation (who hosted a breakfast at the event on Saturday) and was even a part of Utah Sen. Bob Bennett’s 1993 Republican alternative to Hillary Clinton’s healthcare reform proposal.  The Wyden-Bennett Act had the support of Senate Minority Leader Bob Dole, who would go on to become the 1996 GOP presidential candidate just a few years later.

Carson went on to explain the criteria needed for him to participate in a presidential run: “If the circumstances were to evolve in such a way that that seemed to be what God was calling me to do, I would certainly do it.”  Go ahead, God.  Open the barnyard gate for your special lamb to run. 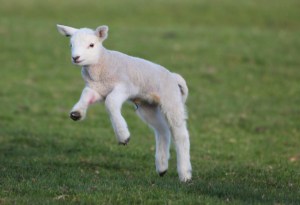 The Values Voter Summit straw poll (next to the tractor pull) found Ben Carson in second place with 13% of the vote, following behind Texas Senator Ted Cruz with 42%.  Mike Huckabee won the 2009 straw poll as the preferred 2012 Republican presidential candidate among the FRC crowd, so I guess this means Cruz will get a show on Fox News.

Speaking of polls, a recent NBC/Wall Street Journal poll shows Ted Cruz’s approval rating at just 14%.  Cruz would be disappointed to learn that President Obama has seen a 2-point increase since last month, rising to a 47% approval rating.  The GOP has hit a record low for an NBC/WSJ poll with an approval rating of just 24%.

The Republican Party also hit a record low in an October 9th Gallup poll with a 28% favorability rating.

Regardless of low ratings, that did not deter Cruz from proudly maintaining his position on the shutdown and Obamacare during his Values Voter Summit appearance: “I’m going to suggest a model for how we turn this country around in the next couple of years.  And it is the model we have been following together for the last couple of months to stop that train wreck, that disaster that is Obamacare.”

During his attack on Obamacare, Cruz wrongly stated that religiously owned businesses such as Hobby Lobby would be forced to cover abortion-inducing pills under the Affordable Care Act.  As we previously discussed in our entry Harvey Dent, emergency contraception such as Plan B is covered under the ACA.  Contrary to Ted’s claims, Emergency contraception does not induce abortion, nor are businesses required to cover abortion-inducing drugs such as RU-486.  As Jesse Pinkman would say, “It’s science, bitch.”

Cruz also blamed the tax increases under Obama for the poor economy, rather than the fact that Congressional Republicans have blocked every single one of the President’s jobs plans.

Perhaps Teddy is unaware that the same tax increases he denounces also primarily lowered the deficit by 35% during the fiscal year.

“The Democrats are feeling the heat,” Cruz told his audience when speaking again of the shutdown he publicly led to fruition.  What?  Dude, you should turn around because you are on fire.

No gathering of insane people would be complete without House Rep. Michele Bachmann.  The Minnesota Republican took her swipe at the Affordable Care Act, re-branding the law from “Obamacare” to “Deathcare.”  Bachmann, in fear monger overdrive, went on to warn the healthcare law would turn our nation into a “police state.”

Rick Santorum told attendees of his travels through a dimensional rift into an alternate reality of historical events… at least, that is the only way I can make sense of his comments.  The former Pennsylvania Senator somehow explained the Affordable Care Act’s female contraception provision was “a descendent of the French Revolution.”  This guy was at one time a leading Republican presidential nominee.

The Values Voter Summit’s speakers seem to agree that the greatest threat to this nation is not the current shutdown, the potential default on our debt, the lack of jobs or the increasingly unstable environment… it’s a law that: